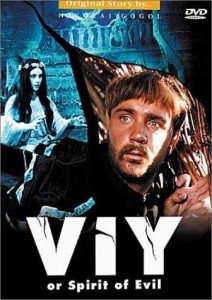 This rare example of Soviet horror cinema is based on a short story of the same name by Nikolai Gogol, supposedly influenced by the folk tales he heard as a child in the Ukraine. Its title comes from the name of a demon that appears late in the tale, but the story is primarily one about witchcraft and revenge.

The story follows the misadventures of a seminary student who rejoices in the name Khoma Brutus. Khoma is a classic literary rogue, combining charm, cunning, cowardice and a complete disinclination to do the right thing until he is given no other choice.

Given a short break from their studies, Khoma and two similarly miscreant students travel from the seminary, get lost in the fog and are forced to seek shelter on a farm when night falls. An old woman they meet on the farm turns out to be a witch, who rides Khoma through the air like a steed. When they land, Khoma grabs a stick and beats the old woman half to death, at which point she turns into a much younger woman. Khoma flees in terror. 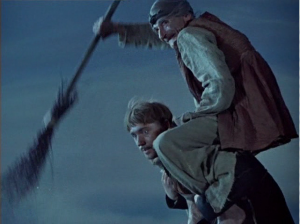 Upon arriving back at the seminary, Khoma’s teacher instructs to go to the home of a Cossack chieftain whose daughter is gravely ill; the daughter has asked for Khoma by name, although Khoma has no idea who she is. Inevitably, he discovers that the daughter is the witch he assaulted, and she has died while Khoma was en route. The chieftain now insists that Khoma stands vigil over the body of his daughter for three nights and prays for her absolution. Khoma of course tries every way he can to get out of this, but he is outnumbered and generally hapless. 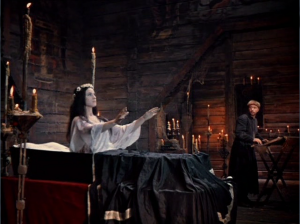 As Khoma carries out his duties, it becomes apparent that the witch is seeking vengeance upon him from beyond the grave, calling upon the forces of Hell to achieve this. The assaults on his person and his faith escalate as his nerves fray, leaving him fearing that we will not survive until the end of the third night. 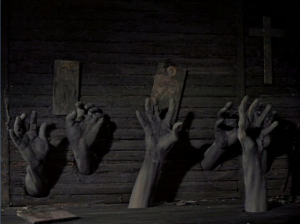 There is a light, wry tone to Viy that continues even as the supernatural horrors mount. Khoma’s interactions with his hosts/captors have a bitter humour to them, and Khoma himself never loses his charm. No matter how bad things get, he is aways capable of sardonic wit or impromptu Cossack dancing, as long as he is fortified by enough vodka.

The special effects are a mixed bag. The makeup for the vampires, werewolves and demons is simple but effective, the flying coffin has a manic energy to it that would be at home in a Sam Raimi film and back projection is used in imaginative and disorientating ways. However, the demon Viy, when he appears, looks silly and shoddily constructed. 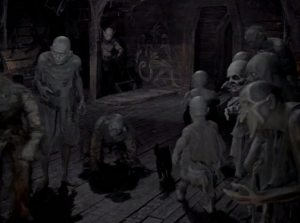 They did the mash…

There is nothing about Viy that is even remotely frightening, but it is a fun, pacey romp with monsters aplenty, which makes it perfect Halloween viewing.

Gogol’s story also served as inspiration for the Yugoslav film, A Holy Place and Mario Bava’s Black Sunday, but Viy remains the only faithful adaptation to date. This is unlikely to change when the action movie Viy 3D is released next year. I wish I were making that up.

Viy is available on YouTube, and includes English subtitles: