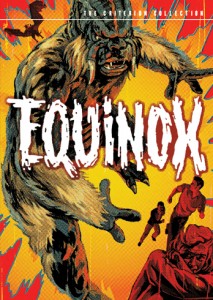 I’ve mentioned elsewhere that the most unforgivable thing a horror film can be, in my opinion, is dull. Whatever other faults it may possess, Equinox is certainly not dull. It is clumsy and chaotic, but so packed full of weirdness and nearly realised ambition that the final result is a joyous, delirious mess. It has the earnest amateur charm of an Ed Wood film, with slightly more technical competence. 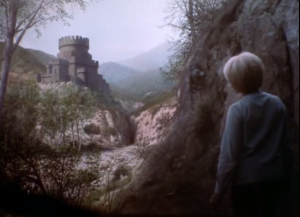 Despite its age and reputation, all I really knew about Equinox beforehand it is that it was an amateur production, an evil book featured in the plot and that Fritz Leiber had a cameo. I’d been told it had echoes of Lovecraft (or at least his Necronomicon) and The Evil Dead by the friend who first recommended the film to me (way back in the mid-eighties). All of these things turned out to be true to varying extents. 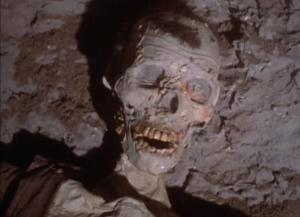 The plot of Equinox is perfunctory at best. A group of teenagers head to the woods to have a picnic and decide to visit the nearby cabin of one of their professors. They discover that the cabin has been destroyed, and are warned to leave the woods by a sinister park ranger by the name of Asmodeus. Seriously, he introduces himself as Asmodeus and no one bats an eyelid; it’s that kind of film. 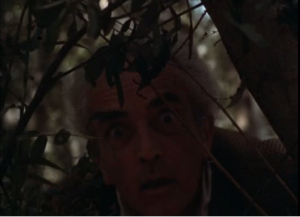 From here on it’s a hallucinatory romp through dark caves, vanishing castles, giant monsters and exploding gravestones, all while being pursued by Asmodeus, who wants an old and sinister book that a cackling old man in a cave handed over. You know, the usual. This is not a film to watch for the story; instead, you wallow in the weirdness of the incidental details. 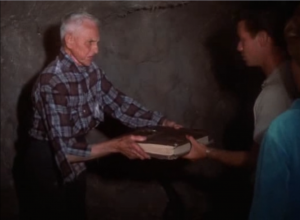 And weird these details are. The laughing man in the cave is strange enough to have wandered out of a David Lynch film. The missing professor turns up to snatch the book, run around looking insane and then drop dead for little reason. Our protagonist is treated in a psychiatric institute that attempts to cure him by giving him the option to stare at a red wall. Before that, he is run over by a driverless car that proves that Satan was 40 years ahead of Google in this arena. Oh, and the main defining characteristic of the book is that it smells bad. 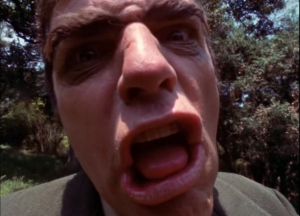 Despite all these strange little flourishes, the most memorable aspect of Equinox is the stop-motion animation. Park Ranger Asmodeus has a magic ring that lets him conjure up giant beasties, and these are depicted through the magic of claymation. The sheer number of these scenes indicate what a labour of love Equinox must have been. The quality of the models varies from worthy to laughable, but the integration with the rest of the film is surprisingly effective. You may find yourself laughing at some of the scenes (assuming you have a pulse and a larynx) but given how amateurish the rest of the production is, they could have been considerably worse. 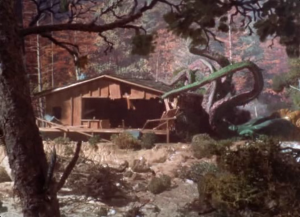 As Carnival of Souls proved, horror films made by amateurs can still be powerful and chilling. While Equinox is no Carnival of Souls, it is no Manos: The Hands of Fate either. The performances may be wooden and the dialogue laughable more often than not, but it is pacey, enthusiastic and engaging in its execution. The director, Jack Woods, did go on to have a professional career in cinema, although as a sound editor. He also plays the role of Asmodeus (really — the park ranger is named Asmodeus!), but this didn’t lead to an acting career. 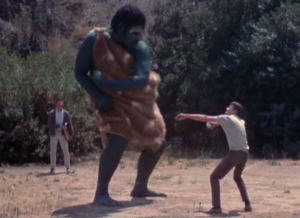 The only sour note in this otherwise harmless and sweet-natured film is the treatment of the female characters. The group of teenagers at the centre of events are two couples, and the women only seem to exist to be the butts of jokes, be disbelieved about what they’ve seen or to be told that they’re not up to manly tasks like clambering up a mild incline. Their characters are so ill-defined that I have trouble remembering them as anything other than the taller one and the shorter one. 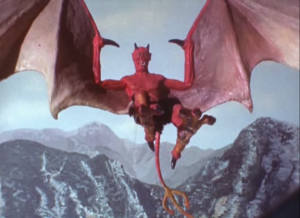 So is Equinox a good film? Dear God, no! Is it an entertaining one? Yes, definitely. It is cheesy, campy and ham-fisted, but undeniable fun. The comparisons I had heard to Lovecraft and The Evil Dead serve it poorly, as it is utterly different in tone and content. It bears more resemblance to B-movie horrors of the fifties and sixties, utterly devoid of real darkness but filled with almost childlike glee. And sometimes that’s just what you want.