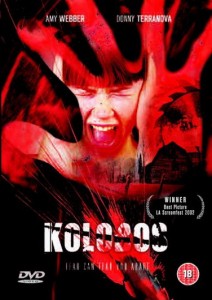 If The Seventh Victim, which I discussed last week, is an example of a film undermined by cuts, Kolobos is a film that went in the opposite direction. It might have been little more than an average if imaginative slasher film had the directors not made a terrible mistake: they misjudged how long the running time of the footage they’d shot would be once edited, finding themselves with a film that was too short for a feature. In desperation t, ey drafted in some writers and quickly shot a framing sequence to pad out the running time, and in doing so transformed their film into a nightmarish, ambiguous American giallo, playing games with identity and memory that resonate through the rest of the film. 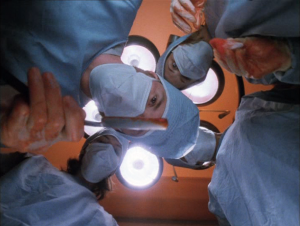 Kolobos drops us in at the deep end, showing events from the perspective of a young woman named Kyra as she staggers through a rainstorm, badly injured, before being run down by a car. Once she has been admitted to hospital, we learn that Kyra has a history of mental illness and self-harm, including at least one suicide attempt. While under anaesthetic, she mutters the word “Kolobos”, although no one knows why. As Kyra begins to recover, we flash back to the events that led her here, and this is where the original film begins. 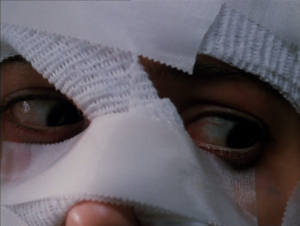 The core of Kolobos follows a group of five young adults who sign up to make what is described as an experimental film, but more resembles the TV series Big Brother. They are to share a large, well-furnished house, with surveillance cameras recording their every move. Of course, as this is a horror film, there is more to their situation than good, wholesome voyeurism, and it doesn’t take long for things to turn bloody. This section of Kolobos is eerily similar to another Big Brother-themed slasher, My Little Eye, which Kolobos pre-dates by three years. 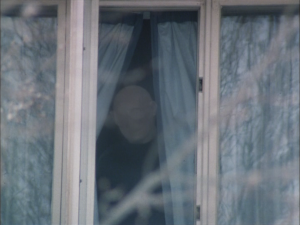 The main thing that stops the middle of Kolobos from feeling like just another slasher film is that Kyra, our point-of-view character, has an unspecified psychotic illness that gives her delusions. This means that we are often unsure of whether we can trust what we see, and whether Kyra is hallucinating, being gaslighted or has some other, more sinister role in events. The disorientation this causes adds a degree of paranoia and unreality to events, making the film significantly more interesting. 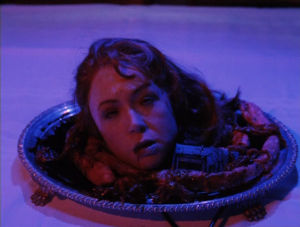 The flipside to this is that while Kyra’s mental health problems are portrayed sympathetically in the early parts of the film, they mutate into more typical horror movie fare as the story progresses. The reaction when her roommate discovers Kyra’s medication comes across as shallow and bigoted, and this prejudice becomes more uncomfortable when the other housemates discover some of Kyra’s artwork, which depicts various violent and gruesome scenes. As the film goes on, we are faced with the increasing likelihood that these prejudices may be correct, that the other characters were right to instinctively fear Kyra. If anything undermined my enjoyment of Kolobos, it was this, and I had to remind myself that expecting sympathetic portrayals of mental health problems in a horror film is pretty insane in itself. 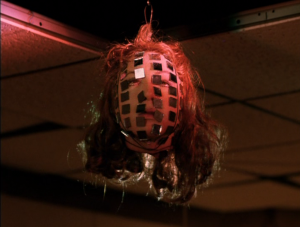 The characters with whom Kyra finds herself sharing the house are, on the whole, petty, superficial and self-centred. This is not to say they’re completely unlikeable; their faults make them more textured than the average slasher film victim, and there is a degree of humour and mockery to their depictions that helps us bond with them. These foibles provide plenty of entertainment as Erica, an egotistical aspiring actress, screens various terrible slasher films she has made for the rest of her housemates. Anyone who has watched bad horror films with friends for the sheer pleasure of mocking them will find much to identify with in this scene. 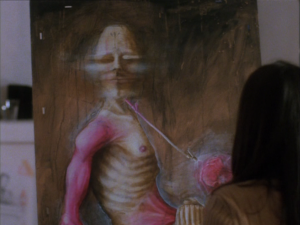 What elevates Kolobos for me, above all other factors, is the final ten or so minutes. These are part of the extra footage shot to pad the running time, and the ending they impose is a dreamy, unreal thing that reminds me of Argento in his prime (a comparison bolstered by a soundtrack which echoes that of Suspiria). This added ending provides a fresh interpretation of the events that have gone before that makes them stranger and more ambiguous. Given how unmemorable Kolobos may have been without this addition, more horror films should have these kinds of production troubles.