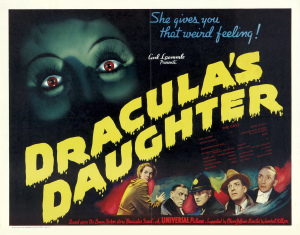 I first saw the 1931 Todd Browning/Bela Lugosi Dracula when I was in my late teens. As a young horror fan, I had read much about it before ever seeing more than clips, and expected it to wow me; instead I found it almost unwatchably hokey and daft. It took some time for me to realise that my reaction was nothing to do with the film itself: while its style was certainly dated, what I first saw as risible or clichéd was the result of my exposure to the many lampoons, pastiches and outright thefts it has suffered. It was impossible to me to see the film for what it was without the layers of cultural artefacts obscuring it. While Dracula’s Daughter doesn’t have to overcome quite the same legacy (ironic, given the story), it is still hokey and daft, only for different reasons. 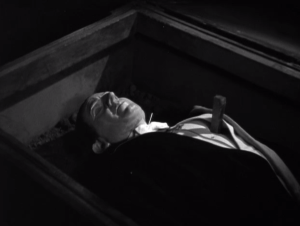 Picking up where Dracula left off, two policemen in Whitby discover the body of Count Dracula, a stake rammed through his heart. Professor Von Helsing (no, not a typo — see below) confesses, but denies the charge of murder on the grounds that Dracula has been dead for 500 years. Deciding that a psychiatrist will help his cause more than a good lawyer — a decision which proves he does need a psychiatrist — he calls upon his former student Jeffrey Garth for help. Meanwhile, Dracula’s body is stolen from a comedy relief policeman by a woman in a veil, wielding a magic ring, who takes the body out to the woods and burns it in a ritual manner. We discover that this is the daughter of the title, Contessa Marya Zeleska; given that she is Hungarian and 300 years younger than Dracula, we can only assume that she is his figurative daughter rather than any biological offspring. On the other hand, given that the film portrays Transylvanians as speaking German, maybe the scriptwriters had no understanding of European geography. 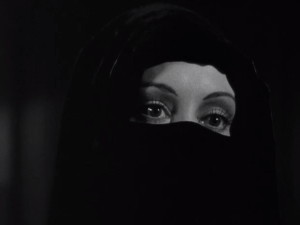 After her attempt to free herself of her father’s vampiric legacy, Contessa Zeleska returns to London, where she soon discovers that this attempt was unsuccessful. Her path, along with that of two of her victims, crosses with Dr Garth, displaying either an uncanny degree of predestination or the belief on the part of the scriptwriters that London is a small town. The Contessa attempts to manipulate Garth into treating her, but ultimately her interest in him turns predatory. Tragedy ensues. 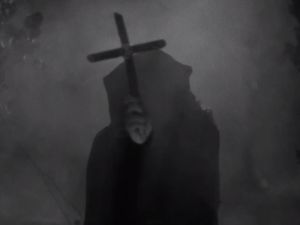 Dracula’s Daughter is a deeply uneven film, despite its short running time. While the core of the story is a rather poignant take on the classic vampire story, with Contessa Zeleska trying to escape her cursed nature, it also relies heavily on the romantic subplot between Dr Garth and his impish assistant Janet (who does not seem to merit a surname) as well as plenty of comic relief. The bumbling policemen spend far more time on screen than they warrant. More peculiarly, the character of Sandor, Contessa Zeleska’s generally sinister manservant, sometimes drifts into that of a morose teenage goth; there is one exchange, in particular, that may have been intended as dramatic, but would be more at home in an episode of The Addams Family. 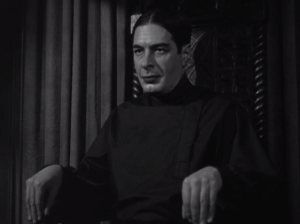 Although ostensibly based on Stoker’s short story Dracula’s Guest, Dracula’s Daughter is very much its own story. Dracula himself only appears as a corpse, and Professor Van Helsing is referred to consistently as Von Helsing. All of this seems to be an attempt to avoid the copyright on the novel, still held at the time by Bram Stoker’s widow. Dracula’s Guest, while originally a chapter of Dracula, had been excised to cut the novel down to a more manageable length and had been allowed to fall out of copyright in the US, giving the studio a cynical opportunity to make a Dracula film free of royalties. 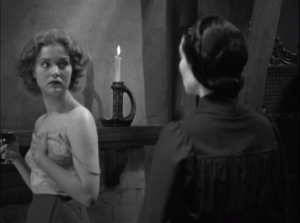 Several contemporary critics have pointed out the strong gay subtext in Dracula’s Daughter, and while it is mostly birthed from one small scene, it is unmistakable. Sandor brings home Lili, a lost soul from the streets of London, for his mistress to snack on. The Contessa attempts to put Lili at her ease by suggesting that the girl model for her, plying Lili with wine and convincing her to disrobe before moving in to feed. While such sexualised portrayals of vampires are common in modern films, I cannot think of a more blatant example from the time. 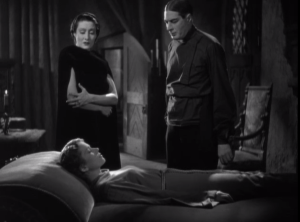 As with many films of the period, I would have liked to have seen Dracula’s Daughter on its release, unburdened by comparisons with what was to come. To modern eyes it is often hopelessly old-fashioned, marred by some off-puttingly ham-fisted storytelling. This is unfortunate, as there is a more delicate, moving story buried underneath the silliness and melodrama. It is still undeniable fun, but jarringly dated.