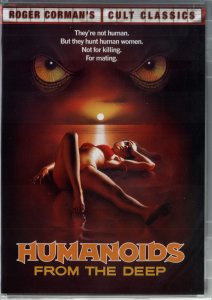 Usually, when the words “Starring Doug McLure” flash up on the screen, you have some idea of what you’re in for: a slab of good-natured cheese, untroubled by originality or production values. Humanoids from the Deep is something altogether different, however, and not in a good way. 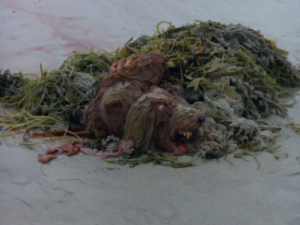 The 1970s is probably my favourite decade for American films (and while Humanoids from the Deep was released in 1980, that’s close enough). The restrictions of the Hays Code were nothing more than a bad memory, and filmmakers were finally free to explore the darker corners of their imaginations. Better still, studios were willing to take risks, putting sizeable amounts of money into more than just tentpole movies, sequels, remakes and adaptations, leading to a flood of strange and sometimes dangerous films.

Humanoids from the Deep is probably not a film that could have been made more than ten years earlier. It blends sex and violence into a cocktail that still has some capacity to shock. The problem is that the producers decided to express their transgression through repeated rape scenes, which make for deeply unpleasant viewing. It got to the stage, around three-quarters of the way through the film, that I despaired of ever being able to get a screengrab of one of the creatures when it wasn’t in mid-rape. 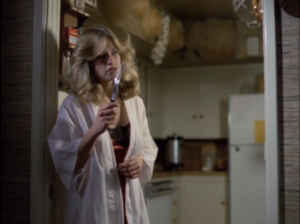 Humanoids from the Deep opens with what appears to be a public service announcement about safety precautions on fishing vessels. A fishing crew off the coast of Noyo, California, make a catalogue of mistakes while trying to reel in a strangely oversized catch, leading to the bloody death of a young boy and an explosion on board the boat. As with many low-budget productions of the time, everything in Humanoids of the Deep explodes three times in quick succession, from different angles. If you’re going to blow something up, you might as well get your money’s worth from it. 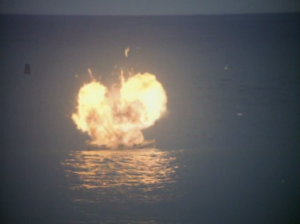 We then meet Doug McLure and family, who wake up one morning to find their dog eaten and their garden covered in Deep One spooge. Things go downhill from there. We are at least treated to all the fun of the 75th annual Noyo Salmon Festival, a brawl between a group of men taught to fight by William Shatner, and a seduction executed via ventriloquist’s dummy. 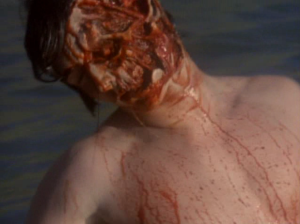 In between the various rapes, there is a story about the intrusion of a large cannery on a local fishing community, scientific excesses gone awry, and Native land rights. At times, it seems that Humanoids from the Deep wants to be an aquatic version of Prophecy, but every time it strays too far down that ecological road, it hits a barrier of gore or cheese. There are also attempts to invoke Jaws, unsurprisingly — even the incidental music in some action scenes sounds like a mash-up between Jaws and Psycho — and, less obviously, Alien, with an almost direct lift from one of its most famous scenes. 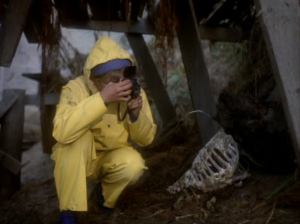 Humanoids from the Deep is also an unexpectedly gory film. I was lulled into a false sense of security due to Roger Corman’s involvement (although his producership is uncredited, possibly out of a sense of shame). A greater surprise came when I realised that the director was a woman — Barbara Peters — although it seems she was not responsible for the film’s excesses. Apparently, Corman decided that the film needed more sex and violence, paying another director to shoot these scenes. I can only assume that Peters’ original cut was considerably less misogynistic. 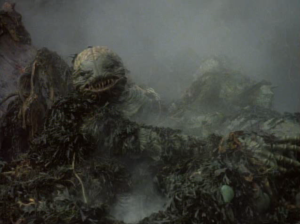 It is insanity to expect any form of scientific accuracy from a film like Humanoids from the Deep, but even then, it is egregious. The creatures are finally revealed to be mutated coelacanths (although Dr Drake, the marine biologist in the film, believes they’re called “koalacanths” — possibly a form of aquatic drop bear). These living fossils have spurred into millions of years of remedial evolution by eating salmon pumped full of growth hormones. This catch-up session, spanning the course of a generation or two, leads them to become humanoid (as all evolution is a race to this form) and capable of breeding with humans. The only aspect that surprises Dr Drake is how big the creatures’ heads are, although she is relieved that they only seem to use a small part of their new brainpower. 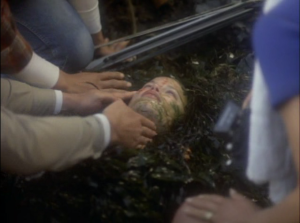 One of the many frustrations about Humanoids of the Deep is that there is a fun, silly monster movie lurking under all the prurient nastiness. As anyone who knows me can attest, I am obsessed with Deep Ones, and the Lovecraft fanboy in me squealed with glee at the first glimpse of a rugose and squamous hand tearing through a fishing net. Once the creatures burst forth from the surf and started on their rape frenzy, however, my heart sank. I feel like a worse person for having seen this film.