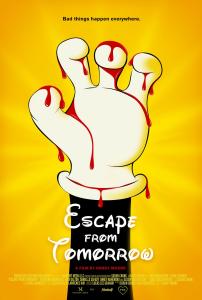 Back in the days before the web took over the world, printed fanzines were the lifeblood of the weird. They provided a cheap and relatively easy mechanism for strange people to communicate strange ideas to other strange people. One of the more macabre offerings was Murder Can Be Fun, which, as the name suggests, took a tongue-in-cheek approach to true crime and other real-life horrors. Issue #13 contained an article about deaths at Disneyland, which was my first exposure to the dark side of the magic kingdom. Since then, I’ve read articles of varying trustworthiness on everything from the populations of feral cats that roam the Magic Kingdom to the old urban myth about Uncle Walt’s cryogenically frozen head being kept on site. Apparently Randy Moore, writer and director of Escape from Tomorrow, has read them too. 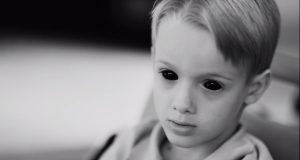 In part, Escape from Tomorrow is a playful look at these myths that surround Disneyland and Walt Disney World. It’s also a portrait of a family imploding, a paranoid science-fiction thriller, a critique of the superficial happiness of modern life, an exercise in guerilla film-making, and, somewhere under all this, a somewhat surreal horror film. And maybe this is the problem with Escape from Tomorrow: it tries to be so many things that it ends up a jumbled, unfocused mess. 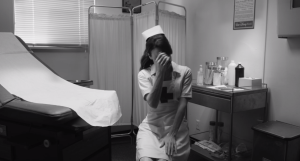 Jim, a father of two, just shy of middle-age, has taken his family on holiday to Walt Disney World. As the film starts out, we learn that Jim has just lost his job, which he hides from his wife, Emily, so that they can enjoy the last day of their holiday. After becoming fixated on two teenage French girls to the extent of stalking them through the park, Jim starts to hallucinate, seeing leering, monstrous faces amongst the smiling dioramas of the rides. His day gets steadily stranger as he meets a creepily seductive woman who seems to know a lot of dark secrets about Disney World, a man in a mobility scooter who seems to take on the role of Jim’s nemesis, despite never really doing anything, and a mad scientist from Siemens who has something important to tell Jim, although we never find out what this is. The day grows more surreal, Jim’s family fractures, and eventually we reach a gruesome ending that largely comes out of nowhere.

There was a real temptation to cap off the synopsis with, “And then a lot of random shit happens.” If Escape from Tomorrow has a narrative beyond this, I am not clever enough to piece it together. There are certainly consistent themes, foreshadowed events and some degree of continuity, but I’m not sure what it all means, if anything. While I do not insist for a moment that a film needs to have a conventional, linear narrative — and indeed some of my favourite films do not — the disparate pieces need to hang together better than they do in Escape from Tomorrow to satisfy me. 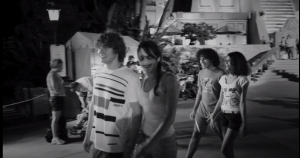 This is not to say that Escape from Tomorrow has no redeeming features. There are plenty of set pieces that are intriguing and entertaining on their own, and there is a pervasive sense of wrongness as Jim loses control of his senses that stopped me from getting bored. Some scenes made for genuinely uncomfortable viewing, especially when dealing with Jim’s growing obsession with two girls barely older than his own daughter. If all these elements had been stitched together more deftly, Escape from Tomorrow could have been Lynchian in tone, instead of a mere curate’s egg of a film. 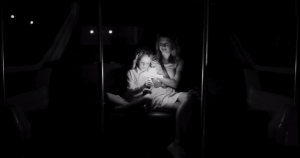 Of course, the aspect that made Escape from Tomorrow famous wasn’t its script, but the fact that it was filmed on location in Walt Disney World and Disneyland without permission. Without this selling point, there really would be no film. It proves to be more than a simple gimmick, however, as the locations add a real sense of innocence corrupted that would have been impossible otherwise. Moreover, the few scenes that take place out of hours, with empty rides and queueing areas, are more eerie and unsettling than any of the scripted horrors. 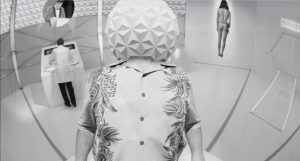 At least as strange as anything in the film itself is that it has not attracted a lawsuit from Disney. I’ve read articles speculating that Disney decided that legal action would only bring more publicity, or that the legal grounds for such a lawsuit were shaky; considering Disney’s reputation for litigation in defence of its intellectual property, these explanations seem improbable. As Harlan Ellison put it, memorably, “…nobody fucks with The Mouse.” 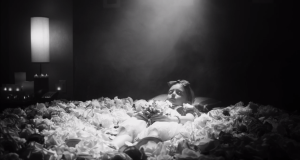 While it’s an imperfect, frustrating, muddled film, Escape from Tomorrow is still worth watching as an oddity. Barring some clumsy green screen shots, it’s a beautiful film to look at, shot in often stark black-and-white. Its cast of not-quite-unknowns turn in some impressively broken performances. Just be prepared to be left wondering whether there was any point beyond getting away with secretly filming under the Mouse’s nose.