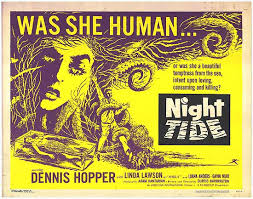 As I mentioned in my review of Humanoids from the Deep, I love monsters from the sea. Well, I specifically mentioned Deep Ones, but I’m open to killer mermaids as well. This is convenient given the film at hand. Night Tide tells the story of a young woman who may be one of the sirens of Greek myth. Of course, as anyone who has kept up with the latest series of QI will tell you, the sirens depicted by Homer weren’t actually mermaids, but half-woman and half-bird, but this is a minor quibble. Night Tide would have been a far less sinister film if its siren were in possession of an arse full of feathers. 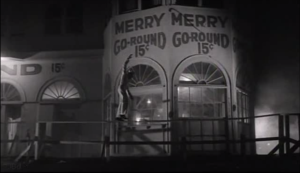 A painfully young Dennis Hopper plays Johnny, a sailor from the US Navy on shore leave in California. While at a jazz club, he encounters the exotic and distant Mora, and is immediately smitten. Johnny pursues Mora with a sort of bumbling, boyish charm that wears her down, and before long they are dating. Mora reveals to Johnny that she is a professional mermaid (“The strangest creature known to man”), spending her days lying in a glass tank on the beach front, legs tucked inside a prosthetic tail; her old friend Captain Murdock, an amiable drunkard and former British naval officer, charges 25 cents for people to see her. 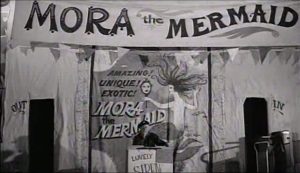 From the outset there are hints that Mora has a dark reputation, with her neighbours (who operate the merry-go-round) shunning her, finally warning Johnny that Mora’s boyfriends tend to die mysteriously and wash up on the shore a few days later. Eventually Captain Murdock, in his cups, tells Johnny that he rescued Mora as a starving orphan child from an island in Greece, and he has come to believe her to be something other than human.  As the moon grows full and the tide grows high, Johnny begins to worry that he will share the same fate as Mora’s other lovers. 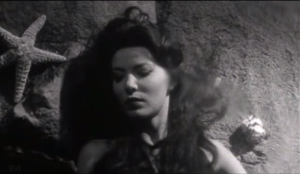 Despite what you may infer from this synopsis, Night Tide is not a monster movie. There are definite parallels to werewolf tales, especially with the link between Mora’s curse and the phase of the moon, and the film has strong echoes of Cat People, but it proves rather more difficult to define. This is still a classic tale of a tragic character fighting against her monstrous nature, but with a sting in the tail (not that mermaids have stingers in theirs, but you know what I mean). 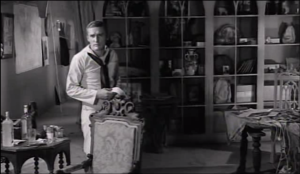 Night Tide is a film rife with ambiguity and deceit, and it is debatable whether it is really a horror film at all. It hits many of the right beats, but, like the fortune that the tarot reader divines for Johnny, it is too complex for simple categorisation. Anyone expecting the conventions of a horror film may be disappointed, but if you are prepared to follow the story into its strange depths, there is much to delight here. It is also a slow, measured film, which, along with the black-and-white cinematography, makes it feel like a relic from an earlier time. 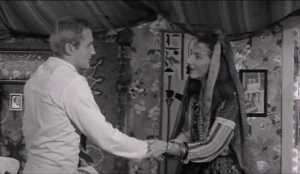 As much as any of the actors, Venice Beach in California plays a leading role in this film. The amusement pier around which most of the action takes place exemplifies that wonderful combination of seediness and glamour that belongs to fairgrounds and circuses, and this seeps into the rest of the film. Many of the supporting characters are similarly vibrant and louche, and I found myself enjoying the setting as much as the story itself. 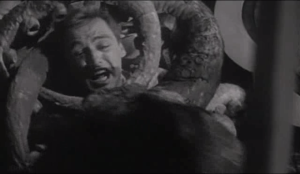 Curtis Harrington, the writer and director of Night Tide, represents a considerable gap in my viewing. I have heard and read tantalising titbits about his work for decades, and have always meant to catch up with his back catalogue; after seeing Night Tide I am more keen than ever to rectify this oversight. This an unusual, well-told tale, and while it is sometimes cheap-looking and rough around the edges, it is charming, unsettling and unique.