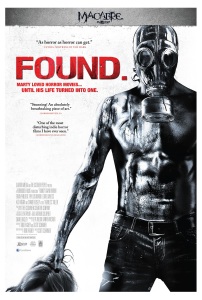 If you’re reading this review, there is a very good chance that you’re a lifelong horror fan. Most horror fans I’ve known discovered this love of all things dark and macabre in childhood, whether in sanitised, child-safe forms or early exposure to something tantalisingly forbidden (I discussed my formative experience of stumbling upon Todd Browning’s Freaks on Swiss TV in an earlier article). We sought out the things our parents said would scare or damage us, welcoming nightmares and testing our limits. We relished films that disgusted us or made us hide our faces in our hands, and, in hushed tones, recounted them to similarly wrong-headed friends. Some of these friends grew out of their love of ghouls and axe murderers, but we never did. There was no hope for us.

In part, Found is a film about what it’s like to be such a fledgling, misfit horror fan, and it does a marvellous job of capturing that feeling of using horror to test and discover yourself. This isn’t a simple exercise in nostalgia, however: the main meat of Found is about what happens when its protagonist discovers that there are far worse horrors in the real world. It is a story about the loss of innocence — the fact that the protagonist is 12 and on the cusp of showing an interest in sex isn’t a coincidence — but a nightmarish, twisted one, less Stand by Me and more Henry: Portrait of a Serial Killer.

Marty, as we discover, has problems with self-confidence, which makes him a target for bullies. Even David, his one real friend, fellow horror fan and collaborator on a gleefully violent comic book, turns against Marty as his weirdness starts making David an outcast as well. As his other relationships disintegrate, his bond with his brother grows stronger. Steve encourages Marty to start using violence as a way of standing up for himself, with predictably unfortunate consequences.

There is a lot more happening in Found than this brief synopsis could hope to cover. While this is primarily a film about the roots of violence, it also has a lot to say about why we are drawn to blood and horror. The two brothers provide very different perspectives: while Marty is a typical horror fan (although he loses his taste for it throughout the film, when confronted by real violence and death), Steve is a sexual sadist.

One of the strongest scenes comes when Marty and David watch a slasher film named Headless, borrowed from Steve’s collection. Marty grows disturbed as he begins to realise that the death scenes are pornography for his brother, and that Steve probably apes the actions of the killer, eating the eyeballs of his victims and having sex with their severed heads. Marty asks himself, “Did this movie turn my brother into a killer?” While the answer is that Steve’s murderous impulses are something more innate, the way the film gives shape to his actions is deeply disturbing.

No one could mistake Found for a professional production. Its budget is a purported $8,000, and while there are some impressive special effects (this is a repulsively gory and violent film in places, but in a deliberate and provocative way), especially in the film-within-a-film segments of Headless, the cheapness of its production is only too apparent at times. Parts of the audio track sound like they were recorded on someone’s iPhone, and a few scenes are badly lit enough to make it difficult to tell what is happening. Worst of all, some of the acting is downright terrible; the actor playing Steve and Marty’s father is so wooden that he must fear termites, which is especially problematic as his presence sucks the life out of some of the most emotionally charged scenes in the film.  Despite these problems, Found has more originality and depth than the majority of professional films I’ve seen, so I am more than happy to cut it some slack. This is an essential film for horror fans, but the mirror it holds up will not always show you want you want to see.