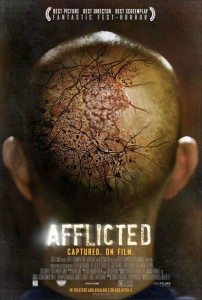 If you’re as neurotic as I am (in which case, you have my sympathies), your brain will often work through vivid and detailed worst-case scenarios — usually around 3 AM. I am a connoisseur of imagined calamity, and my mind’s eye has shown me so much disaster that it sometimes comes as a surprise when I wake up in the morning to find the world still there. One of the more common riffs is over how I would react when faced with imminent death, or at least grave and intractable illness. I’ve seen family members fall apart completely when faced with the reality of death, but a handful of us take stark reminders of mortality as a kind of wake-up call. Personally I think I’m the falling-apart kind and would probably spend my last days hiding under the duvet. Derek, the protagonist of Afflicted takes his challenge as a call to adventure. This turns out less life-affirming than we might hope. 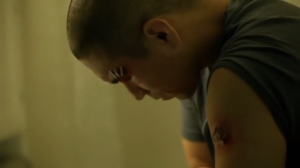 The optimism of the first twenty minutes of Afflicted is bright, cheery and doomed. Writers and directors Derek Lee and Clif Prowse, playing themselves, announce that they will document their year-long journey around the world via a video blog called “Ends of the Earth”. Clif’s enthusiasm for AV equipment provides all the foundation a budding found-footage horror film could ask for. This has all come about because Derek has learned that he has a malformation of the blood vessels in his brain which could kill or cause a crippling aneurysm at any time, and this is his last chance for adventure. After a brief trip to Barcelona, they visit Paris, where Derek meets Audrey, an attractive French woman, in a nightclub. Of course, this being a horror film, Audrey only wants Derek for his blood. 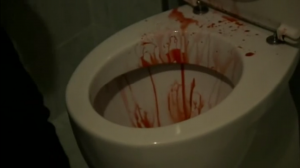 From this point on, the tone of Afflicted changes. The bright trappings of the travelogue fall away, replaced by Clif’s almost methodical documentation of the changes that Derek’s strange and violent one night stand has brought about. Specifically, Derek loses his appetite, develops an extreme reaction to sunlight and becomes hugely strong. All doubt vanishes when Derek finds himself craving blood. Happily Clif and Derek prove genre-savvy enough to accept that Derek is becoming a vampire before the viewer is moved to start shouting at the screen, and they try dealing with the situation in pragmatic if morally questionable ways. As Derek finds it harder to control his bloodlust, growing ever more violent and unpredictable, he decides to head back to Paris to meet his maker. 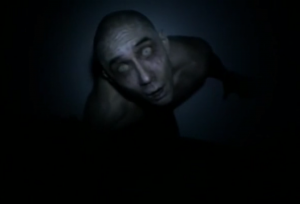 Leaving aside the complaints I make about found-footage films every time I see one (don’t worry — I’ll make some of them soon), my only real gripe with Afflicted is that I felt like I’d seen much of it before. It is pretty much Chronicle, but with vampirism instead of superpowers. The blood-sucker angle does make it sufficiently different that it doesn’t feel like a rip-off, but it is sometimes hard to shake the sense of déjà vu. Aside from that, it’s an engaging, surprisingly dark film that manages a few surprises and shocks. 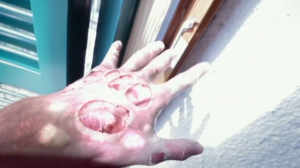 As I’ve said in earlier reviews, the biggest problem I have with most found-footage films is the way the protagonists keep filming things that should have made them drop the camera and run until they puked.  The pretext of the camera being the only light source only works for so long before my suspension of disbelief wants to drink heavily and shout at strangers. Afflicted handles this a bit better than most, introducing strap-on cameras (stop sniggering at the back — it’s not that kind of film) that allow our protagonists to film everything even when running for their lives. An odd side-effect of this is that some of the action scenes feel like screen captures from first-person video games, which I found slightly distracting. A more real irritation is that it leads to a few key scenes being little more than a blur of movement except when the cameraman stops for breath. This is the case with most found-footage films, though, and is no worse here than usual. 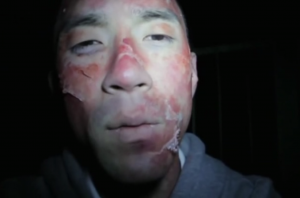 Where Afflicted works best is in its characters. These are two likeable people who know how to present themselves to camera, caught up in a terrible situation and changed by it. No matter how horrible some of their actions are, we can’t help but root for them, and when they suffer, we feel it. I would have liked to have seen more made of the moral dilemma faced by Derek at the end, as it was one of the more interesting aspects of the story to me, and seemed to be resolved or glossed over far too easily. Maybe this opens up a sequel, in which case I can imagine it being even more interesting than this film. 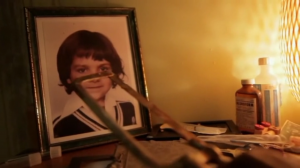 Despite my vocal distaste for all things found-footage, I liked Afflicted far more than I thought I would. It is one of the more creative uses of the format I’ve seen, and benefits from film-makers who see it as something other than a way of keeping the budget down. It hasn’t exactly made a convert of me, but maybe the next time I see a horror film begin with someone talking into a camera I won’t groan quite as loudly.