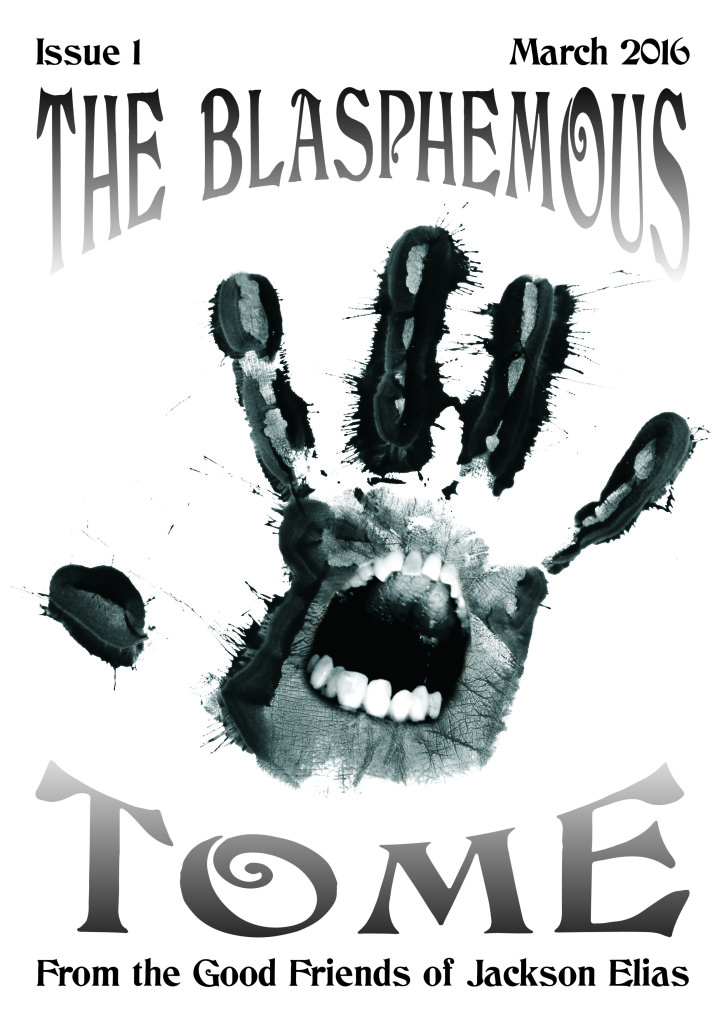 The first issue of The Blasphemous Tome is almost ready to seep into mailboxes around the world. Matt is putting the finishing touches to the layout, Paul is wrapping up the last of the artwork and I’m sitting back and looking smug, having finished my bits over a month ago.

If the name means nothing to you beyond an odd echo of the name of this website, The Blasphemous Tome is a fanzine with a very limited run, created exclusively for those wonderful people who back The Good Friends of Jackson Elias on Patreon. We will ship the first issue in March, and aim to release the second around this time next year.

Every backer will get at least one printed copy. To be precise, backers at the $1 level will receive a standard copy, those at the $3 level will have theirs signed and dedicated, and we will send the $5 backers one of each (so you can put one on eBay!) This is a physical publication only, and we will not be selling copies to anyone else.

The Blasphemous Tome is packed with articles, including a memoir of the shed, the secret history of Attract Fish, a graphic description of what Matt does to the dice that fail him, a behind-the-scenes look at the episodes we had most fun recording, a selection of cocktail recipes, a variety of reviews, the background to our theme song and my personal guide to growing the perfect beard. There is also a systemless scenario, written by the three of us, named The Horror from the Shed, which is suitable for most Cthulhu-type RPGs, as well as OSR games such as Lamentations of the Flame Princess.

And it’s not too late to make sure you receive a copy! This first issue will go out to everyone backing us on Patreon at the end of the day on Monday the 29th of February, 2016.

While you may have to wait a year for the next issue, we have other backer rewards in the pipeline. The Colour Out of Space, the first of our backer-only audio recordings of short weird fiction, will be out soon. We have a nifty new reward planned, but we’re going to hold off announcing it until we’ve delivered the outstanding goodies.

8 comments on “Last Chance for The Blasphemous Tome, Issue 1”