Hello again everyone! I know it’s not quite May yet, but with only a few hours to go, it’s close enough 😉

Continuing my series of occasional updates (i.e. when I have enough projects to report on!), there’s another couple of Cthulhoid Kickstarters that are up at the moment that you might be interested in if you’ve found your way here. 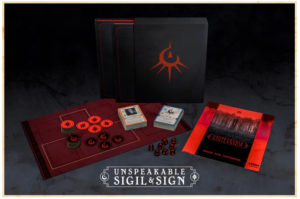 When this one launched, I had a flurry of emails from friends I follow on Kickstarter informing me that they’d backed it. Looks like it’s definitely a popular one.

Sigil & Sign is the Mythos RPG where you get to play the bad guys. It’s an interesting idea, being produced by Cubicle 7 and Make Believe Games, and created by C.A. Suleiman. The production values certainly look very nice and I know will fit in very well on my shelf.

I’m interested to see how scenario design will work for the game. While there’s definitely an allure to playing the bad guy (hell, most of my PCs end up going that way, as many of my GMs will attest to), it’s not a style of play I’ve seen much in scenario design, so that’s going to be a interesting feature for me. Also, it would be good to see how the mechanics for the game have changed. It’s using the same rules engine used for I am Zombie, which Mark Rein-Hagen ran a demo game of that I played in at the UK Games Expo a few years back. I remember it being pretty interesting – no need to write everything down as the cards spell everything out for you.

There’s a core rulebook, associated cards and materials, and four supplements that are being hoping to be funded through the project. With funding sat at 78% of target at the time of writing, with 21 days left to run, I think it’s likely that this one will get funded.

The project runs until May 22nd, with an expected delivery date of June 2018.

The next one will make Scott happy, I’m sure… Sweet Dreams Cthulhu! 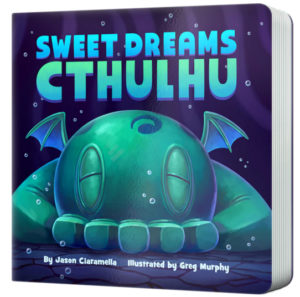 I know such things can be pretty divisive in the Cthulhu community, but the artwork in this one make it very kid-friendly, and I really like the material the group have put out so far, so I’m on the for the ride again. If they get enough funding (they’ve already met their initial goal), nice stretch goals include a kid’s blanket, a new colour of plush, and no doubt other horrors.

I wonder, when it arrives, if I read the story to Scott whether it will warm his heart a little towards this cute imagining of the Master of R’lyeh…? I live in hope 😉

The project runs until May 27th, with an expected delivery date of October 2017.