I’ve been thinking about how horror is a pretty strange thing to love. Plenty of people find horror unappealing for good reasons, from not enjoying being frightened to finding it all a bit silly and juvenile. While no one likes everything, horror as a genre seems to inspire stronger positive and negative reactions than possibly anything except pornography.

For those of us who love darkness, monsters and blood, this usually starts in childhood. A few years ago, I watched a panel at the Alt-Fiction festival in Derby where the assembled horror writers discussed what had kindled their passion. Most of the panellists were around my age, and it was interesting that three of them cited Nigel Kneale’s chilling TV series Beasts. We all would have been around 10 at the time.

I will save discussing Beasts for another post, but what resonated with me was that there was a point in each of their childhoods when they came into contact with something horrific and found that it connected with their imaginations in a new and exciting way. That part of their mind was probably always there, but Beasts awoke it. While Beasts had a similar effect on me when I saw it, something else had stirred the dark part of my imagination before then. 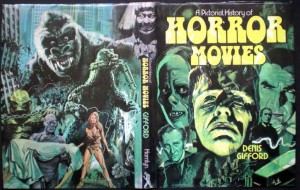 When I was eight years old, my father bought me a copy of Dennis Gifford’s book, A Pictorial History of Horror Movies. I had inherited my father’s love of films — he was a film critic for Radio Hong Kong and one of the founders of the Studio One film club in HK — and cinema was the main interest we shared throughout his life. Even at that age, my tastes tended to the macabre, and the Gifford book cemented that. It quickly became my most treasured possession.

I was a geeky child, and spent much of my time alone in my room, reading. Books fuelled my various obsessions, and I filled my brain with facts about dinosaurs, sharks and the natural world in general. The Gifford book supplemented this with stories of the extremes Lon Chaney went to in becoming The Man of a Thousand Faces, the iconic age of Universal monster movies, and the rather stranger world of what was then modern horror. It was the best introduction a young horror fan could have hoped for — accessible and rich in detail, with plenty of photographs.

Despite the subject matter, it is a surprisingly genteel book. Gifford shied away from the bloodier aspects of the genre.  He considered most horror films made after the 1950s to be tasteless and exploitative, and especially disliked Hammer.

It would be years before I saw many of the films described, but when I finally did, my frequent re-reading of Gifford made them feel like old friends.  In some cases, I even believed that I had seen films because Gifford had made them a part of my memories. It wasn’t until I watched the Karloff/Lugosi collaboration The Black Cat last year that I realised I had never actually watched it before and had just assumed that I had.

The other experience that confirmed me as a horror fan was stumbling across Todd Browning’s Freaks on television when I was about eight or nine.  This was in the early seventies and, as I had learned from Gifford, Freaks had been banned in the UK for many years. This made it especially fascinating  to me. We were living a little outside Geneva then, and Swiss TV had obviously decided that Freaks was suitable for broadcast, so I managed to watch it in secret while my parents were out for the evening.

In case you haven’t encountered it, Freaks is a film from 1932 which tells a tale of emotional manipulation, betrayal and revenge set amongst the performers in a travelling circus. Most of the characters are members of the circus’ freak show. Rather that using special effects, Browning cast real freak show performers of the time, including dwarfs, amputees and people with a variety of birth defects.

Having seen it again it later years, Freaks now comes across as exploitative and insensitive. The main scene of horror in the film, with the villain being pursued through mud and rain by the freak show performers, does rely largely on the audience being disturbed by their appearance.  It is still undeniably an important piece of horror cinema, and an effective one.

Watching Freaks in secret, knowing its reputation as a banned film, made me feel both that I was transgressing somehow and that I was entering some other world of people who had seen this same thing. These were powerful feelings for a child, and they helped shape me.

It occurred to me a while ago that I probably don’t watch horror films for the same reasons as most people. It is very rare that one frightens me. More often, they simply resonate with my imagination, transporting me in a way that other films rarely do. Even though I am not scared, there is a build-up and release of tension, or a cathartic stirring of strong emotions. This makes horror films strange and perversely comforting things. I’m sure that it’s all Dennis Gifford’s fault.