When I write scenarios set in real places, I tend to research them quite thoroughly to avoid cries of “the town hall’s really on X street” or “that building burned down 10 years before your scenario is set”, etc. Where possible, I even try to visit the places to get a better feel for them. When I heard that there was really a place called Dunwich (admittedly here in the UK rather than in Lovecraft Country), I couldn’t pass up the chance to go there and have a look around for myself.

Passing Bedford and Cambridge, then heading down the A14, I left the main highway at Stowmarket and began a 30 mile trek across rural Suffolk along a route the signs indicated was a “tourist trail”. Driving through one village after another, the route is definitely a pleasant one and I’d recommend it to anyone looking for a piece of picturesque rural England. There’s plenty to do along the route too, including local crafts, birds of prey centers, sightseeing locations, etc. After the best part of an hour, the normal two-lane roads devolved into unmarked lanes where passing was a little tight at times, flanked on both sides by high hedgerows. Not long after, I came to a sign under a line of trees which proclaimed “Welcome to Dunwich”.

Along the main road into the village, I passed a stone wall on my right-hand side that was soon identifiable as the ruins of the Greyfriars Monastery. 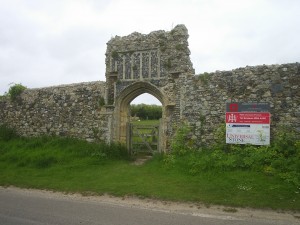 At the end of the road, in the heart of the village itself, a sign directed me to the seaside car park. Here, among the dunes and overlooked by the visitor center and cafe, I parked and instantly regretted not bringing a coat with me. When I’d set off, the weather had been warm (Yes, dear reader, contrary to popular belief, we do actually have warm weather in the UK! It might not happen often, but it had actually been warm all week leading up to this weekend in June), but on the exposed coastline, the wind coming in off the sea make it feel closer to autumn than to summer.

The information display in the car park gives a quick overview of what makes the village a place of interest for sightseeing tourists. Over the centuries, the Suffolk coastline has been eroded at a tremendous rate and much of the great town of Dunwich has consequently fallen into the sea. The map on display there illustrates just how much has been lost over the centuries. The whole upper half of the map below is now gone. 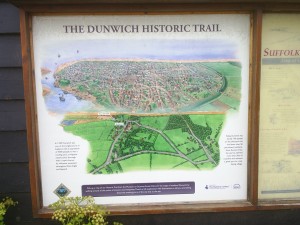 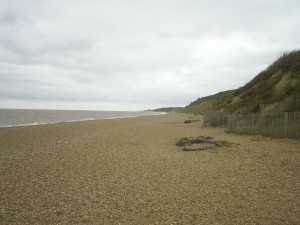 The beach itself is stony and surprisingly loose under-foot. More than once my heels sank into the shingle as I wandered up and down the shore, looking towards Walberswick to the north and the cliffs to the south.

Heading into the village itself, my first port of call was the Dunwich Museum. 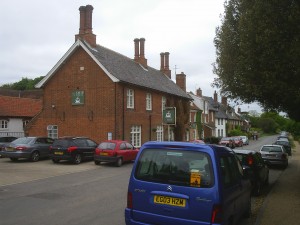 Having been in operation for many years now, the museum chronicles the history of the area from Roman times onward. The lower floor is home to an impressive model recreation of the map above. Alongside a series of panels that detail the different phases of history are items that have been found in the area and out at sea – pieces of masonry, pottery, coins, and a huge bronze canon. Here, one can learn that Dunwich was, centuries ago, one of the largest ports in on the East Anglia coast. It was a prosperous harbor and its profitable fishing industry led to it becoming one of the largest settlements in the area. Whilst measures were historically taken to defend the cliffs from coastal erosion, two tremendous storms in 1287 and 1328 ripped the heart of the community, plunging much of the town into the sea and depositing huge amounts of shingle that ultimately clogged up the bay. With the port no longer viable, the town began to decline. The sea-defenses were no longer maintained and the town slid ever-more into the sea. Even now, it’s only a matter of time before the coast retreats further inland and claims the rest of the village.

Upstairs, a small auditorium plays videos of the local area and further displays illustrate the underwater surveys conducted of the area, as well as a few examples of local legends. One of these, which will no doubt work its way into a scenario set here, is the belief that sometimes sailors have claimed to hear the tolling of the church bells from one of the churches under the waves.

The staff at the museum were extremely helpful, taking the time out to talk to me, answering various questions and providing contact details should I need to dig deeper in my research. As I suspected, they had heard of Lovecraft’s “The Dunwich Horror” and were quite pleased that I had chosen to write about the area myself.

Following the Lovecraft theme, it certainly makes me smile that the local pub and restaurant is called “The Ship”, with its emblem being White. After a very fine lunch indeed, I made my way back up the road to the monastery ruins. 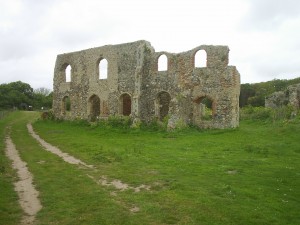 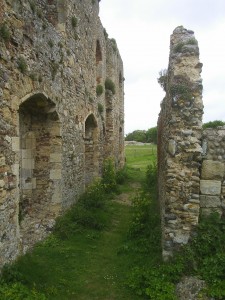 The main features that remain here are the exterior walls and a small part of one of the interior structures (above). Certain parts of the area have been closed off for maintenance works, but I passed through and made my way towards the woods that lined the cliffs. Here, a couple of footpaths cut through a carpet of nettles that has grown amongst the trees. Whilst the trees themselves aren’t high, they form a canopy that lets a modest amount of light through and shrouds the place in semi-gloom that is nicely atmospheric. The paths led through to the old Saxon thoroughfare that cut through the earlier settlement. 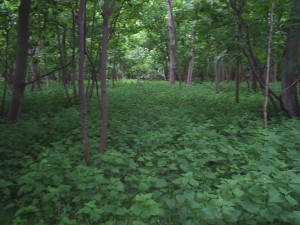 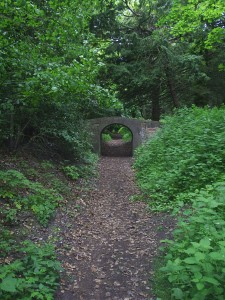 This led me back onto the main road and back along the monastery wall once more. At the far end of the village, passing the museum again, I came to the only remain church in the area whereas there had previously been several in Dunwich’s heyday. At the rear of the church are the ruins of what was once a leper hospital. 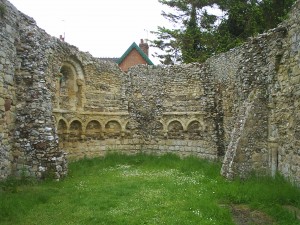 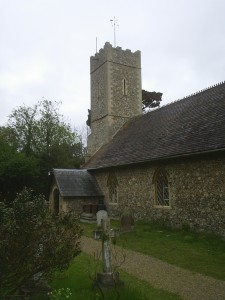 From here, I passed by the two remaining graveyards (in the one connected to the church there also stands the last remaining part of the tower of last church to have fallen into the sea, moved there to preserve it for posterity), the Dunwich war memorial and found myself at the town’s sign, completing my trip. 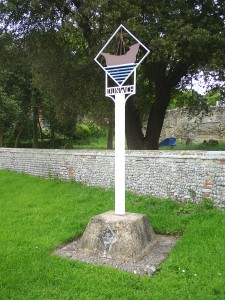 Whilst it might be a bit off the beaten track now, I definitely found it was a day well spent. The history of the area, which I have only touched upon above, is a rich canvas I can use to form the setting for a scenario. Whilst there might not be a Sentinel Hill nearby, and the cries of “Yog-Sothoth!” may not ring out over the rooftops, I think it’s certainly got a lot that it could bring to a Lovecraftian adventure and my hopefully my visit will add to it being portrayed in as realistic and accurate a manner as possible.

7 comments on “Goin’ Down to Dunwich”