Then my friend Seana recommended it to me. Seana has been quite good at gauging my tastes in the past, hooking me on programmes as diverse as The Good Wife and Paranoia Agent. There were two complete series of The Vampire Diaries at this stage and I watched the first few episodes half-heartedly. Before long, though, I was hooked. While the premise is pretty standard for urban fantasy, the writers do two main things that set the programme apart from most television — things that I wish I saw in more roleplaying campaigns. 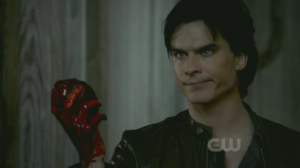 The GM section in Apocalypse World tells you to look at all NPCs through crosshairs, and this is exactly what the writers of The Vampire Diaries do. This creates a real feeling of danger. There is never the safe expectation that the protagonists will prevail, and every conflict carries the risk of death.

Having NPCs threatened by the actions of player characters, monsters and other NPCs helps raise the tension, but only if they are characters that the players have come to care about.  If an NPC has been in play for a while, and the players have grown used to their presence, their sudden and bloody death can prove a strong reminder than no one is safe. Of course, the death of a player character is an even stronger reminder, but it can undermine the game if it feels pointless or arbitrary.

The main aspect of The Vampire Diaries that appeals to me relates to the post I wrote about purist adventures last week. As I mentioned then, one of my main frustrations with many RPG scenarios is that they are about stopping an interesting event from occurring. A coven is trying to raise a centuries-dead necromancer from the grave so that he can tear down the veil between life and death. Of course, it is the job of the player characters to stop this. Most of the time they will succeed, often in a dramatic showdown during the final ritual, and the status quo will be preserved. If they fail, that is the end of the campaign. While the players may enjoy the spectacle of their failure, it is unusual for their characters to have to deal with the consequences.

There was an episode of Doctor Who a few years ago which I found deeply disappointing. It was called The End of Time, and part of it dealt with the impending return of the Time Lords from the annihilation that the Doctor had brought upon them. Throughout the episode, they were pictured as moving ever closer to our reality. I was genuinely excited, thinking their return could make for an exciting arc as the Doctor had to deal with the threat they would pose to time, space and his own existence. Their return is prevented at the last minute, though, and everything goes back to normal. Everyone is safe and there is no ongoing drama. It was dull, obvious, and so terribly safe. 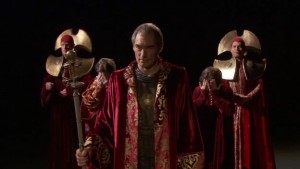 In The Vampire Diaries, when a threat is foreshadowed, it almost inevitably comes to pass. The protagonists will have their lives changed by it. If a powerful new entity is being summoned, the summoning will succeed and the entity will insinuate itself into everyone’s lives. If someone is preparing a ritual that will bring catastrophic change, it will do so and the characters will have to deal with the fallout. The most interesting outcome always happens.

The most impressive trick that the writers of the The Vampire Diaries pull off is not to make the efforts of the protagonists seem ineffectual in the face of this. Sometimes they are simply outclassed or out-manoeuvred. Other times, they choose a more personal victory, such as saving a loved one in the face of the larger catastrophe. The protagonists then move on to adapting to the new threat and the altered status quo. Having the protagonists save the day be satisfying, but failures and unforeseen complications make for much richer drama.

Having major bad things happen in a campaign doesn’t have to feel disempowering for the players. Maybe a ritual happens off-screen or has already finished by the time the player characters hear about it. Maybe their goal is to undo the damage done rather than prevent it from happening in the first place. Some of the PCs may find aspects of the outcome beneficial despite the wider damage done, presenting a hard choice. However you approach it, the important thing is not to leave everyone feeling disappointed that they didn’t get to see the world change in an interesting and surprising way. Keep their lives interesting, even when it hurts.