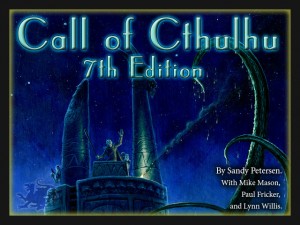 It’s now just over three weeks since the Kickstarter ended and I thought I’d share a little news on how things are progressing.

QUICKSTART RULES
The Quickstart (Kickstart?) rules should be out any day soon. The format is similar to that of previous QS rules in that it presents a cutdown version of the Call of Cthulhu rules; a handful of occupations, a small selection of weapons, rules for skill rolls, pushing skill rolls, healing, sanity, etc. The QS rules are intended for use by complete newcomers to roleplaying so there’s an explanation of what roleplaying games are. Then of course there’s The Haunting. Many people have played this scenario, but it’s a cornerstone of the game and a great intro for those that are new. There’s a lot of new material that isn’t in the Quickstart Rules, for example the new chase rules are something that was easily cut out and we felt would be best presented in the full rulebook.

KEEPER’S SCREEN
The scenario that will accompany the Keeper’s Screen is entitled Blackwater Creek, written by our very own Scott Dorward. It’s a great scenario that has seen a lot of playtesting and development. It’s set in the Classic Era (1920s) in a small town near Dunwich. That scenario is now fully written and has been sent to Chaosium.

CARDS (VARIOUS KINDS)
These are being worked on by Mike Mason and I understand he’s making good progress with them.

NAMELESS HORRORS
This is well under way now. Some of the scenarios have been through playtesting and others are still being developed. The concept behind this collection of scenarios is to present scenarios that do not feature named monsters, nor do they aim for a combat oriented resolution.

LAYOUT
I received a sample of the new layout from Badger this very morning and I’m happy to report that it’s progressing nicely. Charlie (over at Chaosium) is very keen to keep the layout very clean and easy to read.

GENCON
The Gencon Kickstarter games will be taking place on Thursday and Friday. Mike has his scenario written. I’ve playtested mine a couple of times over the last few days and hope to have it written up within the week. I believe Mike’s is a Classic Era scenario, while mine is modern day.

Chaosium is hoping to have some limited edition 7th ed related merchandise available on the stand at Gencon, perhaps a small quota each day (not Kickstarter products – rest assured those won’t be available until the backers have got their hands on them).

CTHULHU THROUGH THE AGES
This is in development. The plan for this is to present an intro for each era along with modified or era-specific
skills reworked for 7th ed. Perhaps a few pages per setting. The intention is not to replace the various setting books but simply to provide a ready to use 7th ed update for each era. There will of course be a 7th ed investigator sheet for each era designed by Dean Engelhart. Dean does some lovely work and has also carried out a series of interviews entitled ‘State of the Tentacle’. Check out my interview on his site here.

BACKER SURVEY
This should go out in the near future, gathering detailed information from each backer with regard to exactly what they have pledged for.

I think that’s all for now folks!