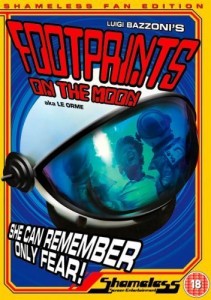 Le Orme/Footprints/Footprints on the Moon (Italy, 1975)

I may have started out the month’s viewings with a misstep. The problem isn’t that Footprints is a bad film — quite the opposite — but that I’m not sure it’s accurate to describe it as horror.

Footprints came to my attention a few months ago, when I was reading through various lists of recommended giallo films in search of fresh blood. If you’re unfamiliar with the term giallo (unlikely if you’re reading this) then it refers to a type of Italian thriller/horror movie inspired by the yellow-covered crime novels published in Italy from the late 1920s (giallo being Italian for yellow).  They tend to be blood-spattered mysteries built around a string of brutal murders, but the term can refer to thrillers in general.

Footprints is much more of a psychological thriller than a horror film. It tells the story of Alice, a Portuguese woman working as a translator in Italy who finds herself with inexplicable gaps in her memory. She is also haunted by dreams of a film she saw years previously, called Footprints on the Moon, involving an astronaut abandoned on the moon as an experiment in isolation. 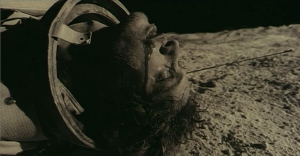 Alice’s attempts to unravel the mystery of her missing time lead her to a resort town named Garma in an undisclosed country (the location used was Kemer in Turkey). The few residents seem to know Alice, although she remembers none of them. The more Alice discovers, the more unsettled she is about her own identity and the nature of the people around her, leading her to take increasingly desperate and bizarre actions.

The pacing of the film is slow, deliberate and atmospheric, and perfectly complements the grand locations and their unsettlingly small occupancy. It all builds toward a relatively predictable conclusion, but the journey is punctuated by enough oddness and imaginative imagery that it feels fresh anyway.

While there is little blood and none of the proto-slasher content of typical gialli, Footprints is most definitely nightmarish and unsettling. And maybe that’s enough to qualify it as a horror film.

I’ll try to find something a bit more visceral for tomorrow.