I’ve just taken delivery of a shiny new Blue Yeti microphone. It feels solid enough to hammer in nails and has a pleasing number of buttons and knobs. 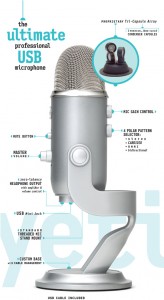 Initial tests suggest that the sound quality of recordings is noticeably better than with the old condenser microphone and mixing board. I think we still need to play around with sound damping and our physical proximity to the microphone, but you should notice an improvement in upcoming episodes.

There is only one episode in the pipeline — a discussion of the Cthulhu Mythos skill — which was recorded using the old equipment. Assuming Paul gets over his sinus infection soon, we should have the first episode using the new microphone out in a fortnight or so.