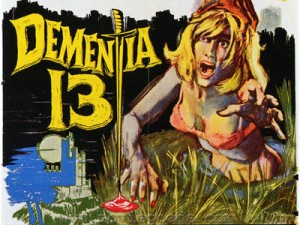 Roger Corman famously mentored a number of writers, actors and directors who would become the cream of Hollywood, including Martin Scorsese, Jack Nicholson, Ron Howard and Peter Bogdanovich. Their work for Corman was usually on low-budget horror, science fiction or action films, but Corman’s eye for talent meant that these films usually had more imagination and energy than most of their contemporaries.

A young Francis Ford Coppola was one of Corman’s stable at American International Pictures, in the early sixties. Corman helped Coppola in making Dementia 13 by allowing him use of sets and actors from Corman’s own The Young Racers, in production at the same time. Despite these limitations and the fact that Coppola was only 23 at the time, Dementia 13 is still a fever dream of a film, packing much strange entertainment into its 75-minute running time. 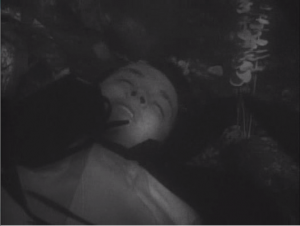 The story begins with the attempt of an avaricious young woman, Louise Haloran, to ensure that she is well provided for in her mother-in-law’s will, despite the older woman’s desire to leave her fortune to charity. This is complicated by the sudden death by heart attack of Louise’s husband, John, while rowing on a nearby lake. Louise attempts to cover up his death to make sure that she still has a claim on the will. She then cynically uses the mystery of the death of John’s younger sister, through a drowning accident many years before, to attempt to forge a connection with her mother-in-law. This in turn leads to the unravelling of various family secrets, resulting in madness, tragedy and multiple axe murders. 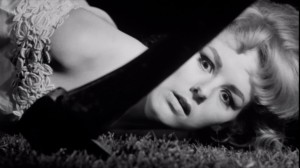 The murderer didn’t even spare the lawn

The tone of Dementia 13 is decidedly Gothic, with its location of a crumbling Irish castle, the secret history of madness in the family and the rituals they conduct to preserve the memory of the drowned girl. This is further enhanced by the film being shot in black and white, with heavy shadows and gloomy lighting throughout. What violence there is happens largely off-camera or through shadow-play, but there are a few moments of brutality.

A few plot elements feel derivative, and the hurried, low-budget shoot means that some scenes are overly murky or contain a visible boom microphone. The fact that most of the hereditary keepers of an old Irish castle speak with broad American accents is also slightly distracting, although there is at least an attempt to explain them. Despite these flaws, Dementia 13 is entertaining throughout and maintains a sinister, moody atmosphere. There are far worse ways to spend 75 minutes. 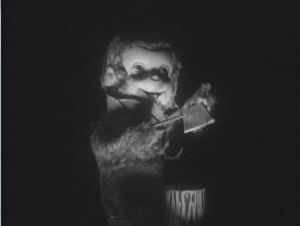 No, this doesn’t give away the identity of the axe murderer

Dementia 13 is in the public domain, and the full version is available on various legal download sites as well as on Youtube.