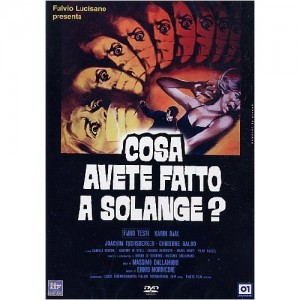 A couple in a rowboat drift down one of more scenic stretches of the Thames, the man trying to convince the woman to have sex with him. The woman thinks she sees something strange happening on the bank — a girl fleeing, a man pursuing and the flash of a knife. Her companion tries to convince her that nothing happened, but the romantic mood is ruined.

Revelations start to build. The man is an Italian teacher at a local Catholic girls’ school and the woman is one of his students. The teacher hears a news report of a murder that matches what the schoolgirl saw and starts to investigate. Before long he is a suspect, his secret affair in danger of exposure and his marriage to a fellow teacher in peril. As the murders continue, he finds himself drawn further into the bloody midst, with more reason than ever to uncover the identity of the man who is murdering his students.

What Have You Done to Solange? is in many ways a typical giallo, but there are a few aspects that set it apart. In a sub-genre defined by style over substance, all the pieces of the story fit together perfectly, building to a memorable and horrifying conclusion. While there are some memorable set pieces, none of them exist purely to create a striking visual, and when all the elements come together in the end there is an emotional impact that is missing from most other gialli. This emotional aspect, assisted by a great score from Ennio Morricone, largely comes from treatment of the victims as human beings, not just objects to be murdered onscreen; we even see the impact of their deaths on their families and friends, especially in one affecting scene where a police detective tries to comfort the parents of a murdered girl.

Some classic giallo elements are also present. The murderer is a mysterious male figure who we encounter mainly through his black-gloved hands. There is an apparently sexual aspect to the murders (be warned — while the film is not overly graphic, the method of murder is extremely unpleasant) as well as a great deal of female nudity and some voyeurism. Red herrings abound, and the protagonist is under suspicion much of the time.

There are also aspects that seem artificial, or at least odd to modern eyes. The police go from treating the protagonist as a suspect to allowing him to participate in the investigation without a second thought. The reaction of most people to a teacher having an affair with a student is unnervingly casual, and while there are repercussions, it seems bizarre watching it now that he isn’t treated as a sex offender. The early seventies were a very different time. 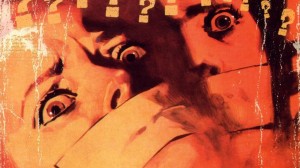 Many reviewers proclaim What Have You Done to Solange? as one of the finest examples of giallo film, or at least an overlooked gem. It is certainly tense, compelling and filled with emotional depth. If giallo films appeal to you, and you can accept the very different sexual politics of the time, there is much to recommend this film. It lacks the nightmarish imagery of Argento’s gialli, or their bloody brutality, but it feels altogether more human, making it fresh and vibrant, even forty years on.

One comment on “October Horror Movie Challenge Day 4 – What Have You Done to Solange?”