I’ve made a poor start to the challenge due to being ill this week. I started with Le Orme and commented with a few thoughts on Scott’s post.

Today I watched a double bill on Lovefilm, and one that turned out to be a surprisingly good pairing. 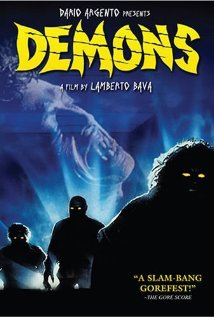 Demons was released in 1985 and captures the 80s in all their horror, along with the music of the time; Billy Idol, Saxon and Motley Crue. Directed by Lamberto Bava, it is ‘presented by’ Dario Argento. The early scenes inside the cinema are quite effective. We see the film reflecting an event that has happened in the cinema foyer and soon the events on screen and those in the cinema become closely entwined. For a moment there I felt I was watching Berberian Sound Studio. It then develops into a romp of zombie gore and chases, along with some curious scene cuts, but who’s worrying about continuity at that stage.

The second feature was Rec 3. 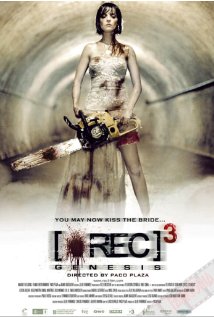 IMDB lists this film as a comedy and yeah, that’s about right. It seems a curious decision to follow Rec 1 and 2 with a comedy. Jaume Balagueró and Paco Plaza are both credited with directing the first two films, with Jaume Balagueró having a writing credit on both. On Rec 3, only Paco Plaza’s name is mentioned, so I think we can see who was the brains behind the operation, and sadly he’s missing on this one.

The film’s full title is Rec 3 Genesis, and I was expecting more about how it all began. What I got was a crazy zombie fest at a wedding. As I was watching it I realised that it was actually very close to Demons in its story. A bunch of people are invited and become trapped in a venue. They are forced to fight zombies. And to cap it all the male lead in both takes up a (presumably decorative but highly effective) sword.