Frankenstein and the Monster from Hell (UK, 1973) 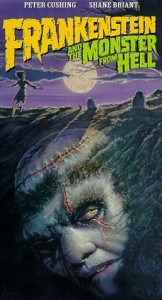 When I was around eight years old, I somehow got hold of a magazine that contained an article about Hammer films. The article was illustrated with many lurid photographs from Hammer productions, including the then-upcoming Frankenstein and the Monster from Hell. The image of the creature having an eyeball sewn into its head entered my mind like some intrusive graft from the good Baron himself. 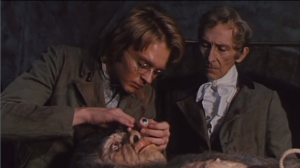 It’s all fun and games until someone…

That night I lay awake in some half-remembered hotel room, watching the patterns in the wallpaper and the shadows cast from the streetlight outside turning themselves into a myriad of monsters, all with an insatiable appetite for the flesh of imaginative young boys. The night passed like a fever dream, with nightmares and imaginings stitched into one constant tapestry of terror. When the morning sunlight awoke me, I felt like I had survived an ordeal. The monsters had spared me, but somehow I would still be theirs for life. Forty years on, and this has yet to change.

Despite this, or maybe because of it, Frankenstein and the Monster from Hell remained the only Hammer Frankenstein film I had not seen, at least until I watched it today. I was afraid that time would have been unkind to it, but like that eight-year-old boy, I need not have been afraid. While it certainly didn’t give me vivid waking nightmares, it was far from being a disappointment. 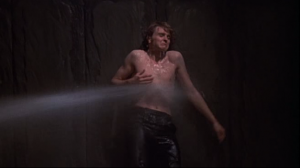 Frankenstein and the Monster from Hell (I need to start reviewing films with shorter titles) opens with the doomed exploits of Simon Helder, a young surgeon who has studied the writings of Baron Frankenstein and is attempting to replicate his work. His reliance on a drunken and cowardly grave-robber (a show-stealing cameo from Patrick Troughton) leads to his arrest, followed by his committal to an asylum for the criminally insane.

It takes little time for Helder to discover that despite reports of his death, the doctor at the asylum is none other than Baron Frankenstein, now calling himself Doctor Victor. Helder insinuates himself into the Baron’s life and work, and assists him with a continuation of the experiments that made the Baron infamous. 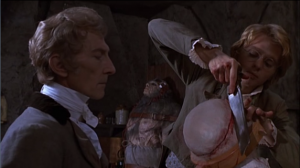 While Frankenstein and the Monster from Hell follows the classic template of Frankenstein’s experiments in creating life going violently wrong, it differs in a few important respects. This is a poignant film that treats the Baron’s creation as a victim more than a brute — the subject whose brain is transplanted into the hulking and repellent shell (portrayed by Darth Vader himself, David Prowse) that the Baron has fashioned is horrified at what he has become, and his degeneration is as heart-rending as it is frightening.

Frankenstein and the Monster from Hell is also the goriest film in the series and from the classic age of Hammer. The surgery scenes, while relatively tame in comparison to modern horror films, are far more graphic than anything Hammer had offered previously, and there are scenes of bloodshed and evisceration that still retain some power to shock. 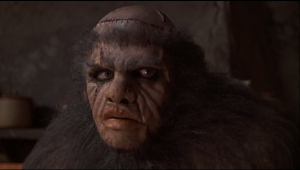 The setting of an old-fashioned lunatic asylum is an atmospheric one, and the script treats the inmates with surprising sympathy. They are portrayed as broken human beings, with their treatment at the hands of their captors and the Baron eliciting pity and horror.

Peter Cushing puts in an exceptional performance, chilling in its good humour and dissociation from the horrors that the Baron has wrought. More than any other Frankenstein film that comes to mind, Frankenstein and the Monster from Hell reminds us that the Baron is more of a monster than anything his experiments could create. 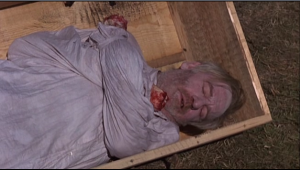 Despite the higher degree of gore, Frankenstein and the Monster from Hell is very much a classic Hammer film. If you find their style campy and dated, this film is unlikely to change your opinion. If, like me, you find charm in lurid colours, larger-than-life characters and Gothic horrors, you may find this exactly what Herr Doktor ordered.