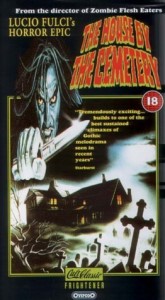 If you watch a Lucio Fulci film expecting it to make sense, you’re in for disappointment. You may also experience nausea and confusion. Check the DVD case for known side-effects.

The House by the Cemetery is not quite the exercise in full-frontal surrealism that The Beyond is, and it even has a relatively coherent main storyline, but Fulci balances this with enough strange characters, irrational action, and shocking and inexplicable imagery to save it from ever becoming predictable or mundane.

The story follows the Boyle family as they move from New York City to New England to allow the father to continue a late colleague’s historical research. The local estate agent leases them the same house, which has the obligatory secret and dark history, a history which also seems to have been the cause of the colleague’s suicide. There is sort of a plot from this point onwards, but frankly it’s mostly pretext to allow Fulci to throw shocks, gore and bemusement at the audience.

Much of the horror comes from the presence of the academic’s wife and young son in the house as weird things happen. The son is a tousle-headed moppet whose toy race car leads him into the dark and dangerous corners of the house. He is watched over by a babysitter who may also be a dismembered mannequin, and is befriended by a little girl who gets psychic warnings which she delivers pointlessly to the camera when no one else is around.

This is not a film to watch for the story, though. Where The House by the Cemetery shines is in the utterly bizarre and often repellent set pieces and incidental details. The film seems to take place in some strange parallel universe where houses have gravestones on the lawn instead of garden gnomes, there is nothing remarkable about the babysitter cleaning up a huge pool of blood from the kitchen floor and it’s considered normal to have a tomb in your living room floor. The house itself is surrounded by so many incongruous animal noises that it sounds more like The House by the Zoo. At one point, the little boy speaks the line, “Anne! Mommy says you’re not dead. Is that true?”

Many of these examples may sound like I am criticising or mocking the film, but I am not. Fulci understood something important about horror — it’s often more disturbing if the details don’t quite make sense. A Fulci film feels like a nightmare, and a nightmare doesn’t scare us because it is well-plotted and has all its loose ends neatly tied; nightmares frighten us because anything can happen, whether or not it is reasonable for it to do so. In some respects, Fulci’s finest work parallels that of Robert Aickman in that they both unsettle by making us feel that we are dreaming while awake. There are far more spilled intestines in Fulci’s work though.

Many Fulci fans are drawn by the gore, and The House by the Cemetery doesn’t disappoint on this front either. There are murders, maimings and dismemberments galore, and some genuinely repellent images of a living dead monstrosity that bleeds pus and maggots when cut open. The House by the Cemetery also offers an ending which is both brutal and chilling, and will stay with you for long after the film ends.

The House by the Cemetery is not quite the classic that The Beyond is. The pacing is poor in places and there are too many scenes that go nowhere. And as starling and bizarre as many of the elements are, it never quite lives up to the delirious promise of The Beyond. Still, it is unpredictable and never less than entertaining, which is more than I can say about most horror films.