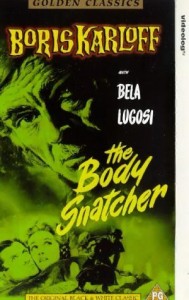 There are few horror films that come with quite the pedigree of the The Body Snatcher. Adapted from a short story by Robert Louis Stevenson and produced by the legendary Val Lewton (producer of Cat People and I Walked with a Zombie), it was directed by Robert Wise, who would later make The Haunting, possibly the finest ghost story committed to film. Moreover, The Body Snatcher was also the final screen pairing of Boris Karloff and Bela Lugosi, who had collaborated on seven previous features and whose names were then synonymous with horror. 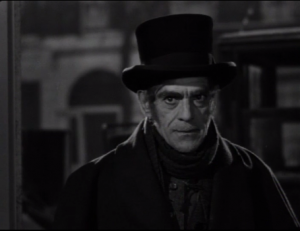 Karloff is undoubtedly the star of The Body Snatcher, taking the role of the sinister cabman and eponymous body snatcher, John Gray. Gray is a sinister presence, spurred to vile acts by avarice and his obsessive desire to have a social hold over the snobbish Doctor MacFarlane. MacFarlane runs a teaching hospital and depends on Gray for the supply of fresh cadavers, but their dark shared history gives Gray other leverage in their power struggles. 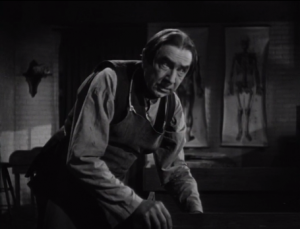 Lugosi, on the other hand, plays a minor role as a menial worker in the hospital who learns that Gray has moved from being a resurrection man to a murderer in order to keep up with demand, and decides to extort money from Gray. Though both Karloff and Lugosi had played iconic roles in the heyday of Universal horror films, it was obvious by this stage that Lugosi’s career was faltering in a way that Karloff’s never quite did. While Karloff worked on progressively lower budget films, his near-swansong was the superior Targets, whereas Lugosi ended his days working with Ed Wood. 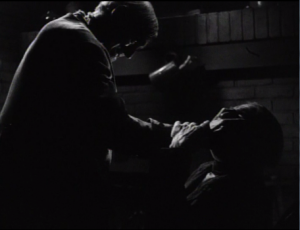 Stevenson’s original story was inspired by the real-life case of Burke and Hare, who murdered 16 people in Edinburgh and sold their bodies to Dr Robert Knox. Knox, Burke and Hare all feature in the background of The Body Snatcher, tied to the shared history of Gray and MacFarlane. The film’s other nod to the history of Edinburgh is a cameo by Greyfriar’s Bobby, the famously loyal terrier that stood watch over its master’s grave, although in this version of history, Bobby’s vigil is cut short by the flat of Gray’s spade. 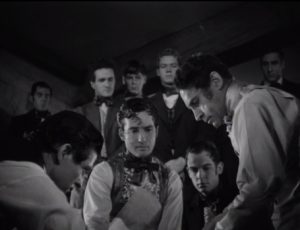 While The Body Snatcher is strongly anchored in Edinburgh’s history, its geography and people are less well served. Apart from a small amount of stock footage, the locations are largely generic studio sets, and the version of Edinburgh presented has only one Scots inhabitant, with the rest of its population comprising Americans, a handful of Englishmen and one rather lost-looking Hungarian. 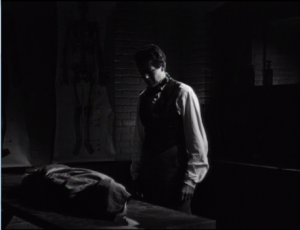 The Body Snatcher is as much a melodrama as it is a horror film, with the struggle to perform a daring operation on a dimpled moppet at the centre of events. When it moves into darker territory, though, it does so unapologetically. The tone of the film is bleak and shadowy, and Karloff’s leering face brings a chill with it. There is murder, grave-robbing, blackmail and betrayal aplenty, and the climax is a white-knuckle ride into the realms of madness.

As a Hollywood film of its period, there is little to The Body Snatcher that will raise a modern eyebrow, but it is an exemplary reminder of a rich and deep type of cinematic storytelling that is largely a thing of the past.