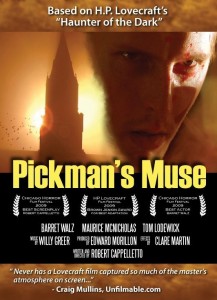 Since the advent of the H P Lovecraft Film Festival, Lovecraftian independent films have become something of a cottage industry. This is a mixed blessing, as it has given us some remarkable films, such as the work of the H P Lovecraft Historical Society, but it has also led to many amateurish and downright painful attempts that assault the viewer’s sanity for the wrong reasons. As a result, I approach any new Lovecraftian independent film with a mixture of excitement and dread. 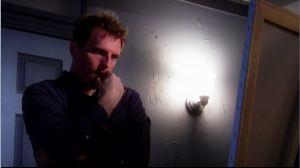 While Pickman’s Muse may not be quite of the same calibre as The Call of Cthulhu or Out of Mind, it is a relatively polished film with a strong script. The restrictions of the budget show in the limited sets and special effects, but writer and director Robert Cappelletto has made excellent use of the resources available to him, and even images as simple as a shape moving behind a frosted glass screen become threatening in his hands. The film’s only weak point is the amateur dramatics-style performance of the actor portraying Dr Ambrose Dexter, which is simultaneously overwrought and stilted. 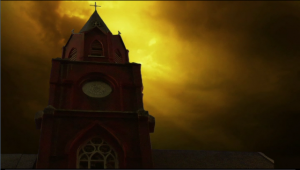 The story itself is a loose adaptation of Lovecraft’s The Haunter of the Dark, although as the title suggests, it uses elements of Pickman’s Model as well. In the film, the artist Robert Pickman is struggling for inspiration when he becomes obsessed with an abandoned church on Federal Hill, visible from his window. After a visit there and an encounter with a strange gem locked in an oddly fashioned metal box, his work changes, becoming abhorrent to sane sensibilities. His friend and doctor, Ambrose Dexter, becomes alarmed, especially as he has seen this happen before, with horrific consequences. 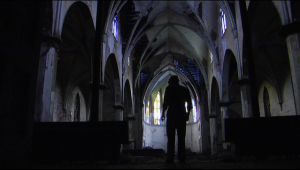 Lovecraft’s stories are notoriously difficult to adapt to the screen. Most of them feature a passive narrator who observes horrors and has few interactions with other characters, and The Haunter of the Dark is no exception. While some die-hard Lovecraft fans may dislike the fusion of the story with Pickman’s Model, and the absence of the Haunter of the Dark itself, Cappelletto’s adaptation is canny and assured, bringing the elements of these two stories together into a coherent and gripping script. Personally I am happiest when I see a free adaptation of work I love — the original stories will always be there, but here we see something new being synthesised from them. 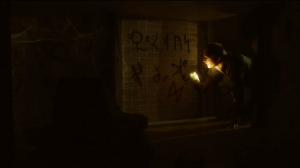 The other potential difficulty Pickman’s Muse overcomes is showing Pickman’s work itself. As the film progresses, his paintings depict alien landscapes and atrocities beyond human comprehension, and the mere viewing of them is an affront to the observer’s morals and sanity. Obviously any depiction of them would fall short of what is described, so Cappelletto wisely shows us only hints and glances, allowing us to experience the horror of the work through the reactions of witnesses. 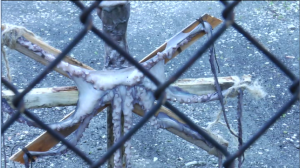 Beyond being one of the more successful Lovecraft adaptations to date, Pickman’s Muse is a strong horror film in its own right. The building menace of Pickman’s descent into madness, the location used for the abandoned church and the subtle ambient score all add to a growing sense of disquiet that pays off with a highly Lovecraftian climax. This is a film that should please any Lovecraft fan, and may make fans out of the uninitiated.