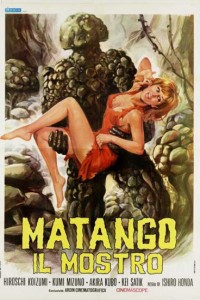 When I was a child, one of the easiest ways to feed my growing horror addiction was to catch hold of every episode I could of any weird TV anthology series that passed through the airwaves near me. I loved The Twilight Zone, The Outer Limits and Alfred Hitchcock Presents, amongst others, although they were only repeated sporadically in Hong Kong. When my parents moved to Switzerland, I continued to watch these programmes, even though my ability to understand them in French was very limited at first. In some cases, this just added to the strangeness, and few stories were stranger than The Voice in the Night when it appeared as an episode of Suspicion.

Based on the short story of the same name by William Hope Hodgson (who would later become one of my favourite writers), The Voice in the Night depicted a ship encountering a lifeboat at sea, the sole occupant of which told the tale of how his crew mates had been devoured by a strange fungus while shipwrecked on an uncharted island. In the end, it is revealed that the previously unseen refugee is also covered with the fungus and is barely human any more. The image of that encrusted figure sitting in the lifeboat haunted me.

I didn’t realise until I started watching Matango that it was also an adaptation of The Voice in the Night, albeit a freer one. In this version, a pleasure yacht sailing out of Japan is caught in a storm, and its passengers and crew are forced to anchor at a strange island while they attempt to repair their vessel. They discover that the island is a veritable ships’ graveyard, and one of more recent wrecks is abandoned and riddled with an unfamiliar fungus. When they discover strange mushrooms on the island and encounter shambling, barely human figures, the horrible truth begins to dawn.

While body horror is very much at the forefront of Matango, most of the tension comes from the pressure put upon the protagonists by dwindling food supplies, old rivalries and sexual jealousy, driving them to acts of violence, betrayal and madness. This comes to a head as food runs out and they are faced with the choice of starvation or suffering the effects of eating the mushrooms.

The effects of the mushrooms are not only physical — eating them brings about a kind of liberating insanity that is reminiscent of the changes induced by the parasites in David Cronenberg’s Shivers. As with Shivers, it is open to debate whether the transformations undergone by the characters in Matango are wholly negative.

The mushrooms and the people they have changed are disturbing presences, often shrouded in the constant mist that cloaks the island. The meaty, deformed appearance of the fungus is made all the more unnerving by the way they grow and change in the rain and, worst of all, laugh with a girlish, echoing giggle.

One particularly chilling aspect of the fungal growths on the human characters is how much they look like radiation burns, given that this is a Japanese film made within living memory of the nuclear attacks on Hiroshima and Nagasaki. This is accentuated by the abandoned ship being a research vessel equipped with a Geiger counter and the hint that the strange properties of the fungus may be related to exposure to radiation.

Matango is a bizarre, disorientating film, with many shifts in tone between comedic scenes, bleak horror, poignant drama and even a couple of musical numbers. While it is not exactly gruesome, the body horror aspect is quite repellent, and the make-up effects are remarkable for the period.

The only weak point is how long it takes Matango to bring in the weirder elements of the plot. The first half of the film is very much about the storm, shipwreck and the struggle for survival on the island, which, while not dull, did leave me slightly impatient. Once the mushrooms come walking, though, we are on an inexorable journey to madness, doom and desolation, exactly as we should be.