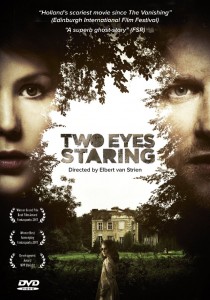 As should be slindingly obvious by now, I love horror films in all their shambling, twisted forms. If I had to choose a favourite subgenre, though, it would be the ghost story. There is nothing inherently superior about ghost stories over bloodier and less subtle forms of horror, no matter what some advocates may tell you, but they do have a way of getting under my skin that nothing else can quite manage. They tap into primal fears of the dark, the dead and of being watched by unseen eyes, but worse, they are stories of our guilt and our worst secrets being given form and power over us. A good bloody slasher film may have us looking over our shoulders when we walk through a quiet car park late at night, but an effective ghost story will fill every shadow with potential nightmares and tickle our thoughts as we lie awake at night.

As the makers of Two Eyes Staring (or Zwarte Water in its original Dutch) know, you can make ghost stories even creepier by involving children. The imagination of childhood and the easy dismissal by adults of the fears it brings make children even more vulnerable when facing supernatural horrors. The dismissal that young Lisa, the protagonist of Two Eyes Staring, experiences is even keener, as it is largely a symptom of her overall emotional distance from her mother, a woman who will even deny her existence when asked about children at a job interview.

The horror in Two Eyes Staring begins when Lisa’s mother inherits the family house in rural Belgium when her own estranged mother dies. Lisa’s parents decide to leave the Netherlands and everything Lisa knows to settle in this large, run-down house full of shadows and secrets, despite their daughter’s protests.

As the family settles in, Lisa makes two discoveries: an old childhood diary of her mother’s which hints at some shocking events, and the ghost of her aunt, Karen, a child herself, who confirms what Lisa reads and is driven to right old wrongs. The revelations start to build, and Lisa finds herself caught up in events that can only end in tragedy.

Two Eyes Staring has a timeless feel to it. It is a style of ghost story that has been with us since Victorian times, but with a few modern twists and flourishes. As with the best ghost stories, it is fundamentally about the psychology of its characters, and in this aspect it doesn’t disappoint. Lisa is a disturbed, lonely child, and her broken relationship with her mother is echoed perfectly by the supernatural manifestations she encounters.

The style and pacing of Two Eyes Staring are very European. There is a slow build-up of dread, with few outright frights and very little action. The effect is, appropriately enough, haunting rather than visceral, and the film will almost certainly appeal to fans of The Devil’s Backbone or The Orphanage.

Ultimately, there is little in Two Eyes Staring that is original, but it makes up for that by exploring some fresh angles of the classic ghost story, leading to a powerful conclusion. And if creepy little dead girls unnerve you as much as me, you may be turning the light on occasionally at night just to make sure they aren’t watching you.