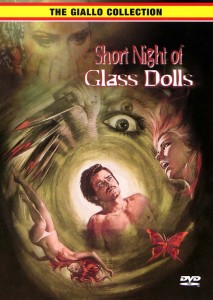 Until recently, my exposure to gialli was limited largely to the films of Dario Argento. This had left me with certain preconceptions of what constitutes a giallo, and one happy side-effect of this month’s viewings has been having these preconceptions ripped apart. What Have you Done to Solange and Footprints on the Moon demonstrated the more poignant and emotional side of the form, and All the Colors of the Dark extended the template into more supernatural and psychedelic areas. Short Night of Glass Dolls has proved the most eye-opening of them all, with its unusual fusion of giallo and paranoid Cold War thriller.

In Short Night of Glass Dolls, Gregory Moore, an American journalist based in Prague, has fallen in love with Mira, a beautiful Czechoslovakian woman, and is working through illicit channels to get her out of the country. These plans are brought to a halt when Mira disappears from his flat, leaving all her belongings behind. Against the wishes of the local authorities, Gregory investigates Mira’s disappearance and uncovers a strange and frightening conspiracy.

You might be forgiven for deciding that the above summary sounds far more like a thriller than a horror film, and if that were all there was to the film, you would be right. What puts Short Night of Glass Dolls firmly in horror movie territory is the framing of the story. At the start of the film, Gregory is discovered lying in a park, apparently dead. As we discover, he is still alive and conscious, but showing no indication of this to the medics who examine him. As such, he is dispatched to the morgue, where he lies in the cold, trying to remember what happened to him and attempting to regain control of his paralysed body. The sheer helplessness of his condition is horror in its purest form.

As well as being possibly the most creative giallo I have seen, Short Night of Glass Dolls is also one of the most beautifully shot. Writer and director Aldo Lado makes exquisite use of Prague as a location, bringing out the grandness of the city in almost every external shot. When the film moves indoors, its beauty is not diminished; we are moving through a world of wealthy expatriates and the political elite of Cold War Czechoslovakia, and this is not the bleak, impoverished representation of life behind the Iron Curtain that we are used to.

No discussion of Short Night of Glass Dolls would be complete without a mention of its enigmatic title. An interview with Aldo Lado, amongst the DVD extras, reveals that the aim was to release it as Short Night of the Butterfly, which makes far more sense, given the use of butterflies as a motif within the film. This name had to be changed at the last minute because of the near-simultaneous release of a giallo named The Bloodstained Butterfly. As the publicity materials had already been designed, Lado changed part of the title so that it would still fit in the right space. In doing so, he created what, for me at least, is one of the most evocative film titles I have encountered.

While Short Night of Glass Dolls is not exactly a forgotten film, it doesn’t get as much attention from horror fans as some of its contemporaries. This may be due to the almost bloodless nature of the film. What it lacks in gore, it more that makes up for in paranoia and palm-sweating fear at the plight of the protagonist. What’s more, it has one of the darkest and most memorable resolutions I have seen in a horror film.