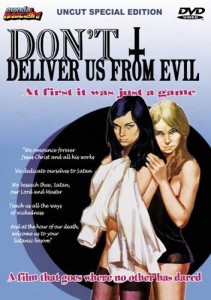 Rebellion could barely exist without repression. After all, if there were nothing against which to rebel, what would an act of rebellion entail? This was exemplified by Aleister Crowley, who spent his entire life rebelling against his strict and dour childhood, his parents devout members of Plymouth Brethren. In Crowley’s case, this led to a life of decadence, sexual experimentation, drugs and the refutation of religion through magick, leading to his moniker as the “wickedest man in the world”. If he had been born into a more permissive household, the world may never have known him as more than a mountaineer and second-rate poet. 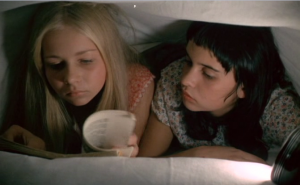 This type of rebellion is at the heart of Don’t Deliver Us from Evil, a very French look at the pernicious acts performed by two Catholic schoolgirls who decide to embrace evil in the form of Satanism. The story was inspired by the real-life 1954 Parker-Hulme murder case in Christchurch, New Zealand, the same case which served as the basis of Peter Jackson’s later film, Heavenly Creatures. While Heavenly Creatures aims to be a representation of the actual events, Don’t Deliver Us from Evil is pure fiction. 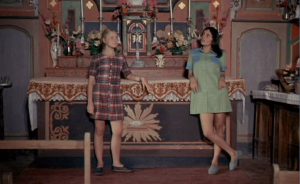 Anne, the daughter of a count, and Lore, who is from a neighbouring upper-middle-class family, both go to the same Catholic boarding school and have become so close that their friendship borders on obsessive love. As the film starts, they have decided to dedicate themselves to Satan and to perform acts of cruelty in his name. These escalate as the story progresses, ultimately leading to murder. 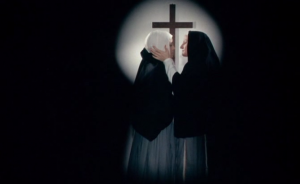 Despite  the Satanic aspect of the girls’ rebellion, Don’t Deliver Us from Evil is not a supernatural tale in any form. Satanism is simply the vehicle for the expression of the girls’ desires, taking the form of a reaction to their Catholic upbringing. The evil on display is a uniquely human one, that of two privileged young women who see nothing but amusement in bringing suffering to those they see as social or intellectual inferiors. Initially these acts are relatively minor ones, but by the time Anne starts killing the pet birds which are the only companions of a neighbouring farm worker, there is no doubt that they are motivated by true malice and cruelty. 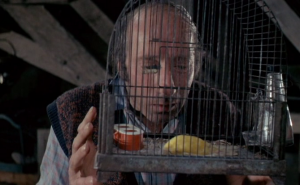 One of the more disturbing aspects of the film is how closely these acts of cruelty are linked to the girls’ burgeoning sexuality. They use flirtation and partial nudity to provoke the men around them, discovering that this can lead to dangerous situations they can no longer control. While the actresses themselves were 19 when this was filmed, the fact that they look younger makes these scenes all the more uncomfortable. 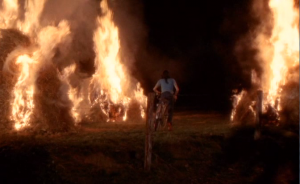 The Satanic aspect of the story led to the suppression of the film in France, at the behest of the Catholic church. While many contemporary films were more explicit in sex and violence, this particular cocktail of themes was considered a step too far. Even now, over 40 years later, Don’t Deliver Us from Evil still retains the power to shock. 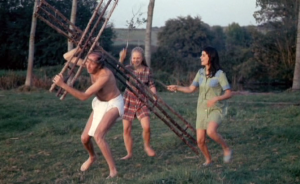 Apart from Satanism, the other influence shown to have a hold over the girls is that of French decadent literature. Anne and Lore are obsessed with the Comte de Lautreamont’s Les Chants de Maldoror, and when they come to put on a performance at a school recital, they base it on a poem by Baudelaire. The veneer of intellectualism that this lends to the girls’ acts of evil makes them all the more repellent. 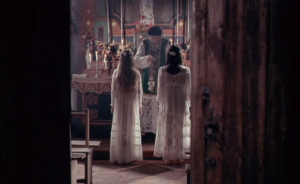 Don’t Deliver Us from Evil is a much more complicated and unusual film than is apparent from any simple description of it. It is certainly not the occult-tinged horror film that it appears to be at first blush, and while it is sexually charged, it is a far different beast than the exploitation films of its time. Its mix of teenage rebellion, blasphemy, obsessive love and sadism is a rich and very human one, and will not be forgotten quickly.