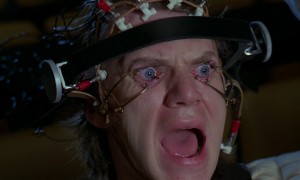 I never thought I’d say this, but I’m looking forward to taking a break from horror films. It will be a short break, but watching something else will be a much-needed palate-cleanser. I need to get the taste of blood out of my mouth.

For the most part, I have hugely enjoyed the films I’ve seen over the last 31 days. Most of them had been on my notional list for some time, and few of them disappointed. While I found Blue Sunshine and Pin dull, and Trilogy of Terror too silly for words, there wasn’t a single film I actually disliked.

Picking a favourite is difficult, as various films appealed to me in different ways. The Dead Inside stands out as the film which entertained me the most, and its mix of horror, comedy, drama and song was refreshingly different.

Viy was also wildly entertaining. I never would have suspected that a 1960s Soviet film based on a 19th-century Russian story would be so funny.

Many of the films were delightfully bizarre, something I have come to value in horror, but Beyond the Darkness and Horrors of Malformed Men were the real standouts on this front.

While none of the films really scared me, Short Night of Glass Dolls (especially the ending) and Don’t Deliver Us from Evil unnerved me. The emotional sadism of the latter shocked me more than any amount of spilled guts could.

I could go on like this, recapping what I loved about each film, but if you want that, just read the damn reviews!

While October may almost be over, I enjoyed writing these reviews enough that I plan to continue with them. My goal is to post a review here every time I watch a horror film I have not seen before. I am not insane enough to keep up the pace of a film a day, despite the damage done to my psyche by Beyond the Darkness and Horrors of Malformed Men, but I should manage one or two a week.

Now if you’ll excuse me, I have one last film from the Challenge to watch and review.