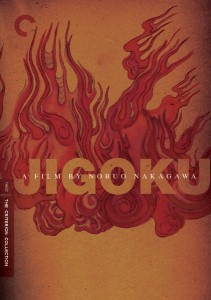 At last we come to the final film of the October Horror Movie Challenge, and happily it’s a good one. As I mentioned in an earlier post, I will continue posting reviews, but not anywhere near as frequently. I’m tired and I need to sleep.

It’s easy to think of Hell as being a peculiarly Christian concept, but as a lecture we observe early in Jigoku reminds us, it is found in other religions as well. The hell which gives Jigoku its name and substance is a Buddhist one, but it is no less terrifying than anything found in Dante’s Inferno.

For the first hour of its running time, Jigoku is largely a mixture of melodrama and morality play. It follows a cascade of horrible events stemming from one violent  incident, ending in a series of unlikely and bizarre deaths, something like a Final Destination film as reinvented by Monty Python. While this portion of the film has its share of sin, betrayal and murder, it left me wondering why Jigoku has a reputation as an unusually potent horror film for its time. Once everyone was dead and the action shifted to Hell, the reason for this reputation became apparent.

The last forty minutes of Jigoku are a cavalcade of bizarre imagery, atrocity and blood. The hell depicted is one of inventive torment, and we see characters boiled, dismembered, flayed and buried alive. While the level of gore is not excessive by today’s standards, it is quite shocking for a film from 1960. Japanese genre cinema has a well-earned reputation for its extremity, and this seems to be where it all started.

If that description makes Jigoku sound like a splatter movie, that would be misleading. It is, first and foremost, a morality tale. The protagonist, Shirô, is tempted into sin by a demon posing as his friend. The sin that starts the spiral into death and damnation is Shirô allowing himself to be convinced to take no action when his demonic companion runs over a drunken Yakuza thug on a dark road. This single action brings tragedy in many forms, and while Shirô is not a malicious character — in fact, he comes across as quite the innocent — it is his inaction that damns him all the way through.

As a relative innocent, Shirô seems less fitted to Hell than the venal companions who join him there. As the story develops, it seems that Shirô may have a chance at redemption, but the forces of Hell are set against him, and his struggle to do the right thing in the face of this adversity makes the last third of the film tense and thrilling as well as blood-soaked.

Jigoku is a beautiful film to look at. Even before the descent into Technicolor Hell, there are some wonderfully creative uses of location, especially that of a rope bridge over a gully. Once we enter Hell, the film becomes quite theatrical, and I was reminded often of the films of Powell and Pressburger in the stagy sets, spot lighting and vibrant use of colour.

If I had to find fault with Jigoku, it would be that the earthbound portion of the film lasts too long. It is never dull, but considering that it is largely the set-up for the scenes in Hell, the fact that it makes up two-thirds of the film seems excessive. Once we get to Hell, though, all concerns about pacing are dashed.

Religious horror films are hardly novel, but it is refreshing to see one based in Buddhist scripture. Despite this, Jigoku would work as a Christian allegory with surprisingly few changes. More than this, it is a ground-breaking horror film that pushed boundaries at a time when western cinema was still bound by law, censorship and misguided notions of good taste.