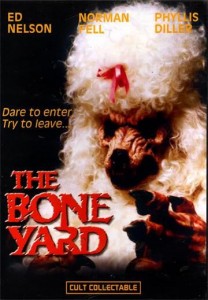 Despite being an indiscriminately omnivorous horror fan, I had never even heard of The Boneyard until last year. I saw mention of it on someone else’s OHMC list, with a note saying that it was reminiscent of Re-Animator and Peter Jackson’s early work, so I added it to my ever-growing list of films to be watched. I’m glad that I did. 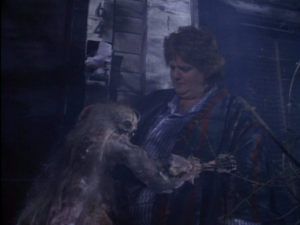 The plot of The Boneyard is an uncomplicated one. Jersey Callum, a police detective, contacts Alley Oates, a burnt-out psychic whose abilities he trusts, to help with a particularly macabre case. The bodies of three children have been discovered in the storeroom of a funeral parlour, and it appears that they had been kept prisoner and fed on human remains. The funeral director insists that they are neither children nor dead, but are the earthly vessels of an evil spirit. Detective Callum takes Oates to a rundown morgue on the verge of closure (nicknamed the Boneyard) to see if she can learn anything about who these children were. Almost inevitably, the children turn out to be undead nightmares, and our protagonists find themselves besieged in the basement of the morgue, fighting for their lives. 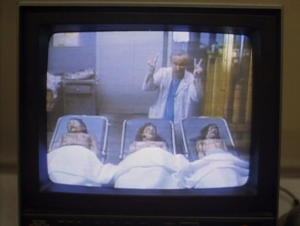 The Boneyard is an oddity. Like a number of films of the time, it edges into comedy in places, but remains far from light-hearted. We are presented with a sometimes uneasy mix of gore, farce, poignancy, drama and genuine darkness. It is a rare film that mixes child torture, moving dialogue about a character’s suicidal impulses and a giant zombie toy poodle. Things are made all the stranger by casting comic actors like Phyllis Diller and Norman Fell in central roles. 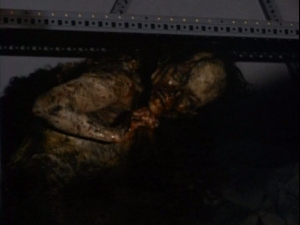 As all of this may indicate, there is an almost wilful lack of concern for commercial appeal underpinning The Boneyard. This is perhaps most evident in the protagonist being an overweight middle-aged woman, which is a rare delight in a genre that tends to be marketed to younger audiences. In fact, barring the supporting characters of a pair of young lovers, who meet across an autopsy table as one of them is being dissected, the cast is decidedly grey. Moreover, we get to appreciate that some of these characters are genuinely broken people who had given up on life until faced with the prospect of violent death. 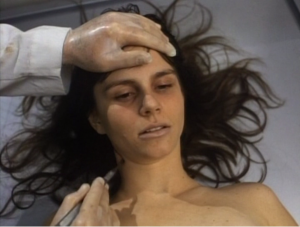 The special effects in The Boneyard are jarringly uneven, which is surprising, given that the director, James Cummins, was a long-time effects artist. The make-up for the child zombies is repellent, giving a real impression of menace and putrescence. When they spread their taint to one of the supporting characters, however, the monster she becomes is represented by a puppet that looks so bizarrely comical that it seems to come out of a different film. The poodle monster, as ludicrous as it seems, is a far more disturbing creation, like a yeti with a perm, and manages to be oddly sinister in places. 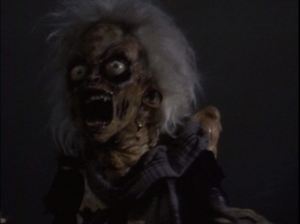 By all objective measures, The Boneyard is a mess, and that’s one of the things that endears it to me. It stands apart in its sheer strangeness, and even when the mishmash of tones works against it, the end result is never dull. If nothing else, The Boneyard refuses to be pedestrian, and in a genre that is at its weakest when played safe, this is an admirable thing.

One comment on “October Horror Movie Challenge 2014, Day 4 – The Boneyard”