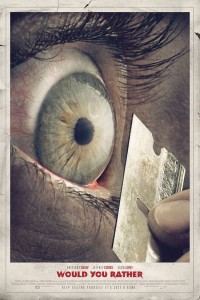 If the USA ever adopts nationwide socialised healthcare it will cause chaos in Hollywood. Crippling medical bills have provided reliable motivation for characters to take foolhardy and extreme action for as long as films have been around. In Would You Rather, Iris, our protagonist, has dropped everything in her own life to provide for her brother, who has an unspecified form of cancer and requires a bone marrow transplant. Her desperation leads her to accept a mysterious and patently sinister invitation to take part in a competition hosted by louche billionaire Shepard Lambrick, played by Jeffrey Combs.

This competition takes the form, initially, of a dinner party. Iris and seven other guests/contestants, the characters of whom are painted in broad strokes, are taken to one of Lambrick’s many mansions and served a luscious meal. The meal provides the first hint of Lambrick’s predilections, as he offers Iris, a lifelong vegetarian, a large stack of money to eat a steak in front of everyone. This is just the opening salvo, and before long Lambrick invites everyone to play a high-stakes game of Would You Rather, where the contestants are given scant seconds to choose one of two unappealing alternatives or face a grim forfeit. By the time Lambrick’s staff have covered the dining room walls and floor in plastic sheeting, you know where things are heading.

Predictability is the main problem here. Would You Rather treads well-worn ground, and often feels like a cross between Saw and They Shoot Horses, Don’t They? There are also comparisons to be made with Truth or Dare and the exquisitely nasty Cheap Thrills, although these are less fair considering they all came out around the same time. In some respects, the main surprise Would You Rather has to offer is that it remains entertaining despite being largely predictable. Once you know the premise, the overall shape of events and eventual outcome will hold few surprises. The energy and inventiveness within the confines of this premise, however, help make Would You Rather relentlessly entertaining.

A large part of the credit for making Would You Rather work must go to Jeffrey Combs. His character is potentially one-dimensional, but the glee with which he portrays Lambrick’s sadistic manipulations is infectious. This is a grown child playing with his new toys on Christmas morning, taking pleasure in breaking them in imaginative ways. No matter how horrible the tortures he inflicts on his reluctant dinner guests, you can’t help but root for him on some level.

The other factor that makes Would You Rather a more enjoyable film than it has any right to be is that it doesn’t pull any punches. The film toys with its viewers as Lambrick toys with his guests, offering false hope and providing only unremitting cruelty. Every worst case scenario I imagined as events unfolded was not only met, but often exceeded. While none of this is played for laughs, the sustained effect of these horrors drifts into black comedy, which only makes the film more entertaining.

While there is little overt gore on display, Would You Rather will certainly push a number of buttons. It is difficult to say which scenes will affect people most, as the torments on display draw on a range of personal fears. There is one scene, late on in the film, which found one of my weak spots and had me cringing in my chair in a way that few horror films have managed. The synopsis and tags on the film’s IMDB page will warn you what most of these torments are; unless you are especially concerned about phobias being triggered, I recommend against reading them as they will spoil some of the juiciest surprises.

Would You Rather will not be remembered as one of the greats of horror cinema. It is too derivative and predictable for that. It does, however, offer a treat for fans of Jeffrey Combs and, more importantly, 90 minutes of unflinchingly cruel entertainment. This is a film that your inner sadist will relish.