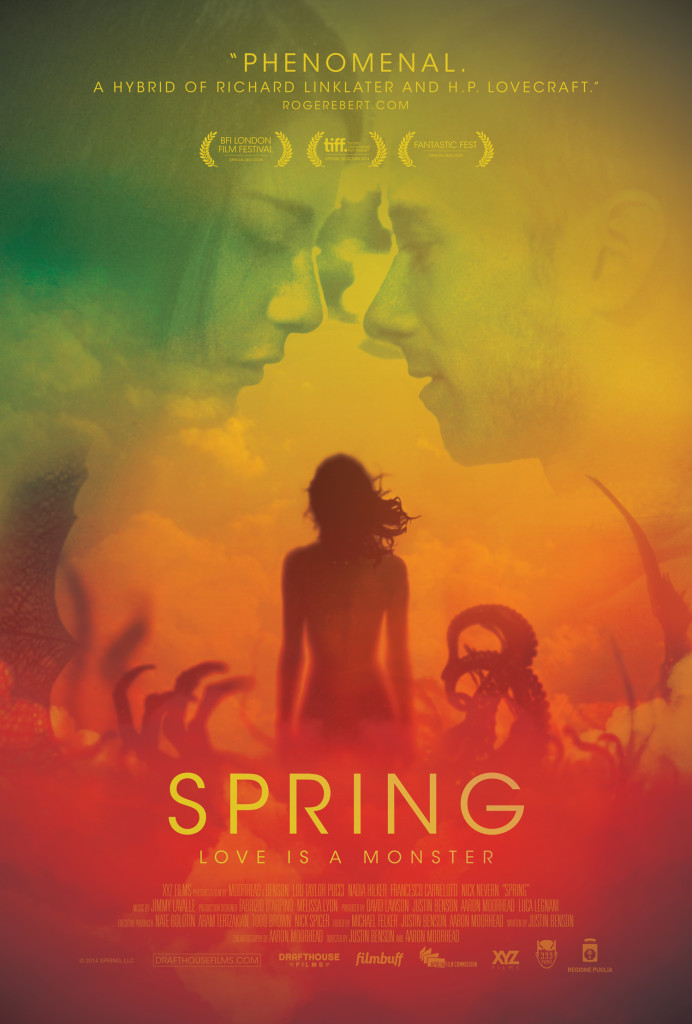 I’ve always loved stories about sympathetic monsters. When I was young, one of my favourites was The Werewolf and the Vampire by R Chetwynd-Hayes. It is a love story between the two eponymous monsters that moves from being wry to touching and finally deeply poignant, all without forgetting its underpinnings as a horror story. It’s a delicate balance, and one I have rarely seen repeated. As I tried to sort out my thoughts and feelings about Spring, my mind kept drifting back to it.

Spring follows Evan, a young man from Southern California whose life is falling apart. The film opens with his mother dying from cancer. His grief leads him into a largely justified but excessively violent altercation with a loud-mouth at a bar that costs him his job, attracts the attention of the police and leaves him fearing violent retribution. Faced with this toxic cocktail of problems and emotional turmoil, Evan flees the country, heading to Italy on a whim.

After drunken escapades with a couple of English tourists in Rome, Evan heads down to the rural south. Here he finds work as a farmhand, starts learning some basic Italian and meets Louise, a beautiful young student with an unidentifiable accent. With Evan’s life turning into a grand adventure, we might forget that this is a horror film until we see the first signs of Louise’s dark secret. As this unravels, and the blood starts to flow, the film drifts in and out of horror, sometimes quite viscerally. At the same time, Spring never stops being a romance. We are never quite sure where it is headed: the revelations about Louise’s true nature are unexpected and offer no clear-cut solutions. The final act is almost completely unexpected, a rare thing in horror films.

I keep describing Spring as a horror film, but I wonder whether this is an accurate label. It has earned comparisons with Richard Linklater’s Before Sunrise, and I certainly found myself increasingly reminded of it as the story progressed. Spring is unashamedly a love story, but a love story where one of the lovers is a shape-shifting monster. The relationship between the two characters grows organically and feels utterly real. In fact the whole film has an earthy, naturalistic style that grounds it and makes its stranger excesses all the more believable and disturbing.

A handful of reviews have described Spring as Lovecraftian. Personally I don’t see it as such. There are strange mutations, body horror and even a few tentacles, but the underlying premise is one rooted in humanity and nature. The motifs of creepy-crawlies and predatory animals that punctuate the film remind us that nature is often horrific enough, without having to bring in forces from beyond our reality. Moreover, the romantic and emotional depths of the film are about as far away from Lovecraft as one can get. It still wouldn’t take many changes to reimagine Spring in a Lovecraftian light, throwing in a few rites to Shub-Niggurath perhaps, but I’m not sure this would offer any kind of improvement.

Spring is the second collaboration between directors Justin Benson and Aaron Moorhead, who are shaping up to be a major force in modern horror. Their first film, Resolution, was one of the most interesting and memorable horror films I saw last year. It cleverly plays with and subverts many of the tropes of modern horror, setting up scenarios that never quite play out, building up to disconcerting revelations about their source. Despite being shot for almost no money, its clever script allows it to play out like a more subtle take on The Cabin in the Woods. Their next collaboration will apparently be a biopic of Aleister Crowley, and I can’t wait to see what they do with such a meaty subject.

I can see Spring being a divisive film. People expecting more traditional horror may be frustrated by its slow pace and romantic inclinations. Those drawn to the love story may be repelled when the blood and ichor start flying. If both of these aspects appeal, and you are open to a leisurely, beautifully shot mix of them, then Spring will be a rare treat. Personally, I find it hard to imagine another horror film this year moving me quite as much.