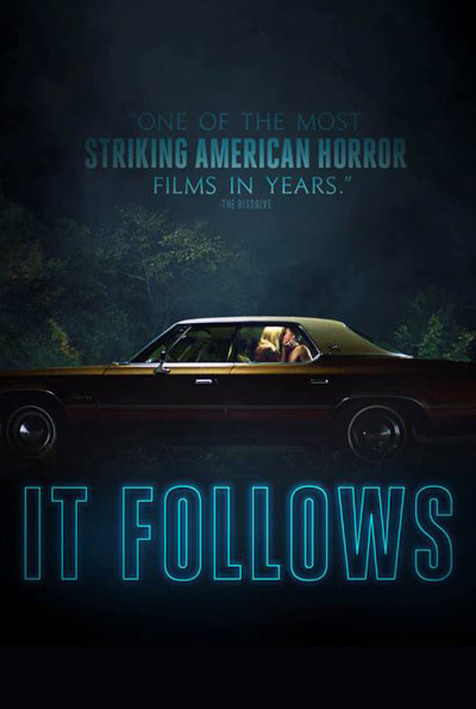 Being of a morbid disposition, I’ve spent more of my life thinking about death than is probably healthy. And while I’ve always found it easy to joke about dark subjects, middle age is making it harder to laugh away mortal thoughts. When you lose people you care about, or see grey hairs and lines growing across your face like grave mould, death stops being an abstract. In those dark, sleepless moments of 3 AM introspection, death’s inevitability is suffocating. As Philip Larkin, another morbid old sod, put it, “Most things may never happen: this one will”. And it’s this feeling of inevitability that fills It Follows with dread.

In many ways, It Follows is about as straightforward as a horror film can be. Jay, our protagonist, spends most of the running time being followed by an implacable foe who will not rest until she is dead. This is the fear of death in its purest form — being prey, stalked by a relentless predator. Jay can run, hide and accept the help of friends, but death is always on her trail, slowly, steadily and with no need of sleep.

Like all of the main characters, Jay is somewhere in that strange territory between teenage years and adulthood. She lives in a blandly sunny suburb of Detroit, in a world that seems perfectly normal at first blush, but is riddled with incongruities that add to a sensation of nightmare. Jay and her friends seem to have few ties to the world — no mention is made of jobs or studies — and the adults in their lives only seem to exist in photographs or to be mimicked by Jay’s supernatural stalker. When, late in the film, they decide to hole up at a swimming pool, the building is perfectly maintained, with power and clean water in the pool itself, but there is no one else to be seen. Other people exist only superficially.

Their world is also populated by anachronisms, such as CRT televisions that show black-and-white movies, electric typewriters, huge old-fashioned cars and clothing more suited to the 1970s than the present day. At the same time, Jay’s friend, Yara, reads extracts from Dostoyevsky’s The Idiot from a tiny clamshell e-reader. The timeless feeling is underlined by a spare synthesiser soundtrack that would be perfectly at home in any number of early eighties horror films.

At the start of the film, Jay is in the tentative stages of a relationship with Hugh, a charismatic but nervous young man who seems prone to seeing people who aren’t there. After a couple of dates, the two have sex, and in lieu of a post-coital cuddle, Hugh chloroforms Jay and ties her to an office chair in an abandoned building. This, he explains to a frightened and sceptical Jay, is to show her proof of the madness that he needs to make real to her. Hugh has just passed on a sexually transmitted curse to Jay: she will now be stalked by a human figure that only the cursed can see, and which may appear as anyone. It will continue to do so until Jay has sex with someone else, passing the curse on as Hugh did. If the stalker kills that person before they in turn have passed it on, the curse reverts to Jay, and so on, in a pyramid scheme built on sex and death.

This last aspect explains Hugh’s actions. By training Jay to identify and avoid the creature, he is helping to maintain his new buffer. As the story demonstrates later, passing the curse on to someone who fails to protect themselves only provides a brief respite. One of the many unusual aspects of It Follows is that the rules it sets turn the more standard morality of teen horror on its head: once you’re targeted, promiscuity suddenly becomes a survival strategy rather than an invitation to destruction. The film doesn’t verbalise this, but it is clearly demonstrated.

I mention teen horror, but It Follows bears only superficial similarities in the age of its central characters and the mixture of sex and death. In tone, this is a very different kind of film. There is little action, no music apart from the score and a thoroughly sombre tone. Most importantly, there are no scares, jump or otherwise; this is an exercise in growing suspense, and there are few releases from it. When a horror film makes you jump out of your seat, this is normally followed by shocked or relieved laughter; It Follows will not let you off the hook so easily. This means that, for example, when we have a scene of Jay sitting in an empty playground at night, after fleeing an attack, the sense of dread is almost unbearable even though we see nothing more than a young woman sitting on a swing and looking around.

The monster at the heart of It Follows is both familiar and fresh. It is defined by a simple set of rules: it can appear as anyone; people who aren’t cursed are unable to see it; it never moves at more than a walking pace; it will stalk only the most recent person in the chain; and it will not stop until you are dead. This is very much a monster for people who like the slow zombies of George Romero films or The Walking Dead. The running zombies of most recent films may be ferocious predators, able to shock us with sudden lunges and surprise attacks, but Romero’s zombies are the slow, relentless inevitability of death itself: no matter what you do or how long it takes, they will get you. And so it is with Jay’s stalker. She can drive miles away, get a day or two’s peace, but unless she keeps moving she will fall prey eventually.

The mutable form of the creature is used to great effect. While it can sometimes appear harmless, allowing it to get closer to its prey, it largely seems driven to unnerve or shock. It uses nudity in a number of its guises, and its attack is repellently sexual. This is especially unnerving when it appears as a parent of one of its attempted victims. In one scene it trickles an unending stream of urine down its leg, making for one of the most viscerally unpleasant moments in what is largely a bloodless film.

It Follows is not fun. This is not the film to put on for a light evening’s entertainment. It is ponderous, slightly pretentious and often the very antithesis of most modern horror films. Metaphor runs through every aspect of it, but these metaphors are rarely simple analogies. It is tempting to see It Follows as being about venereal disease or the loss of innocence or the realisation of mortality or any number of things, but for such a simple film it does not reduce easily to simple concepts. It may sometimes feel a bit muddled or too eager to show off its own cleverness, but it is as successful an exercise in dread as I can remember seeing. Long after the shocks and scares of other films have faded, this is the one that will be in my head as I’m lying in bed at 3 AM, staring at the dark corners of the room and trying not to think of how near death is creeping.