Well, it’s been a while since an update on Kickstarter from me. I’m pretty surprised this is the case to be honest. I thought I’d be doing something like this monthly, but it hasn’t turned out that way. The reason being that I tend to only write about the projects I actively put money towards… and there haven’t been any Cthulhu products to actively grab me enough to throw money at them since March! Very strange… There was this “Cold War” project that apparently did quite well, but Scott got to telling everyone about that before me (and yes, I did sent some money that way!).

Since the Curse of the Yellow Sign that I mentioned in my last update, non-Cthulhu projects that I’ve backed have included:

The Cask of Amontillado Barrel Tiki Mug – being a fan of Poe, and the good work done by “The Horror in Clay” with their previous Lovecraft-inspired projects, I jumped on this one

Lore of the Clans, for Vampire the Masquerade 20th Anniversary Edition – creating a deluxe version of the sourcebook

Witch Hunter, Grand Tome of Adversaries – this one failed to fund, but it looks like a PoD version might be available sometime in the future anyway

The Psychobilly Tarot – a tarot deck with some interesting artwork

Back to the Asylum Playing Cards – an attempt to complete a deck of cards lauched on Kickstarter a few years back (which I also backed), where the project creator (not the artist) ran away with the funds and never carried through the project. Hopefully I might get something this time around!

At last though, following the success of World War Cthulhu: Cold War, another project (although of a very different style) has finally come along. I know it’s definitely going to interest Scott a lot… 🙂

C Is for Cthulhu Board Book and Plush Toy 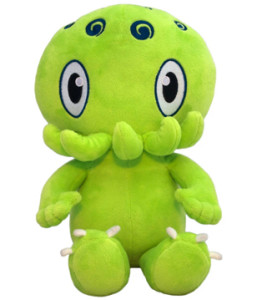 I backed the original project for the book a while ago. The thing that grabbed me here was the plush.

I know there are people that really don’t like the plushes, etc. but under my cold, hard Keeper’s exterior, I’ve got a soft spot for these little guys. There’s also been a fair bit of engagement with the backers here, running caption competitions in the comments section and updates, etc. so it’s been a fair bit of fun all round.

Plus, I can always torment Scott with them, so it’s worth every cent!

I hear there’s another couple of projects coming up in the near future, so when these go live (no plushes in sight, so I’m told) I’ll let everyone know.