A little later than planned, but here we are!

It’s a new month, and there’s some new Kickstarter projects to back. The first of these, I’ve been looking forward to for a while. The second was worth it to see the look on Scott’s face when I told him about it. 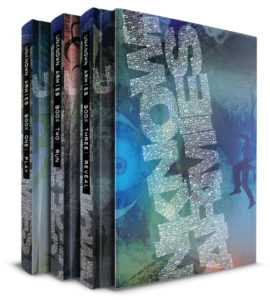 As I’ve mentioned before, Unknown Armies is one of my all-time favourite RPGs. I was excited to hear that it was coming to Kickstarter and signed up to the Atlas Games mailing list to keep me informed of when it went live.

To begin with, one of the nice perks for this project is that when you become a backer, you can go to Update #1 and get access to the draft files for the three books that form the core set of the game, immediately. I’m yet to do this, because I don’t find it particularly easy reading text off a screen – this is why I much prefer my dead tree versions – but I’ve picked some bits.

It appears that there’s been quite an overhaul of the rules and updated setting. The mechanics have changed a fair bit, and while there’s a handful of familiar Avatars alongside a new bunch, all the Adept schools are new. That was quite a surprise.

The physical products on offer through the Kickstarter are very pretty indeed. The core game is now divided between three books. Initially, I thought this was going to mirror the “Street, Global and Cosmic” structure from Second Edition, but that’s not the case. Book One: Play is the player’s book containing the rules (including Avatar and Adept schools, etc.), Book Two: Run is the GM’s book (giving advice on how to run the game), and Book Three: Reveal is the encyclopedia of occult knowledge (i.e. lots of setting material entries, including references to material that was in the previous editions). Having read through a few entries in Reveal, I’m very excited!

In addition to the physical books, there’s a Deluxe set that has a magnetic slip-case that unfolds to become the GM Screen. I’m having trouble trying to visualize exactly how that’s going to work but it sounds good. There’s also a set of UA dice from Q-Workshop, that come in sets of three, with a “333” logo on one side – nice touch.

As part of the stretch goals for the project, as it funded quickly, there are two digital-only supplements being released as well – Book Four: Expose (described so far only as new material and content), and Book Five: Mine (rituals, organizations, archetypes, and magickal phenomena).

The only things I can say I’m disappointed about are that there are no physical rewards on offer through the Kickstarter that will not be available later, which could put off people from backing (especially as the postage costs are pretty horrendous from the USA – another thing that stings), and that Books Four and Five are only digital. As mentioned above, I like my dead tree. Even if they do print-on-demand, I’d rather have that than stare at a computer screen.

There’s a few high-level tiers, but they’ve pretty much all sold out within hours of going live, that get a few extra bonuses (e.g. photo in the book, handmade postcards, being able to determine what goes in parts of Book Five, etc.). These include, at the highest levels, a set that includes one of a set of two ouija-board-esque pieces of art by Greg Stolze himself. I resisted those, but am happy to be a Patron of Book Five.

As of the time of writing, the project has 12 days left to run and will close on Friday, April 29th.

And now for Scott’s favourite… 🙂

The C is for Cthulhu Coloring Book 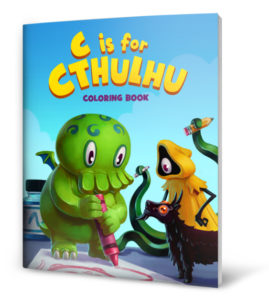 First there was the Alphabet book, then the Plush toy, and now the coloring book.

This features some line-art versions of the illustrations in the Alphabet book that your little cultists can bring to life with colours out of space.

Personally, I think it’s pretty cute. Yep, not a phrase a purist (or Scott) would use, but I like what they’ve done so far. I backed the previous two projects (and even won a caption contest on the Plush project to get my rewards doubled!) so definitely wanted in on this one. As if I needed any extra incentive… 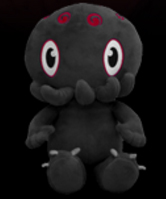 If they hit $20,000 (which is a little under $4,000 away at the time of writing) they will unlock the Black Cthulhu Plush, to make a fourth colour choice to the entire range.

Well, I’m a completest. I want my black plush!

I think these plushes are probably the most kid-friendly of the ones released so far. A perfect toy for the cultists of tomorrow to snuggle up to while they make their way to the Dreamlands.

As of the time of writing, the project has 13 days left to run and will close on Saturday, April 30th. 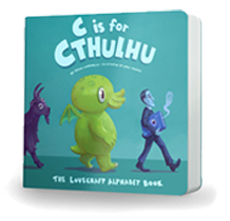