Hello everyone! It’s been a bit quiet on the Cthulhu front for Kickstarters recently (well, at least ones I’ve had funds to back anyway – Deadlands 20th Anniversary saw to that, tempting me with a whiskey box that I’d seen before and never been able to buy until now!). However, that’s changed with two projects from returning creators.

First up, The Book of Three Gates 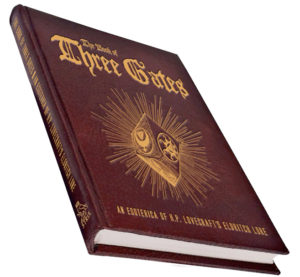 This comes from the team at Strix Publishing that recently finished up work on The Book of Starry Wisdom.

To put it in context, The Book of Starry Wisdom collects together three Lovecraft stories featuring Cthulhu and/or his cult (Dagon, The Call of Cthulhu, and The Shadow over Innsmouth) together with some black & white illustrations, and essays on the topic from various authors that have touched the Mythos at one point or another.

The theme linking the stories in The Book of Three Gates is the breaking of the barriers between worlds (The Dunwich Horror, The Dreams in the Witch House, The Haunter of the Dark). Once again, there will be accompanying artwork and essays.

Size-wise, the book is similar in height and width to a normal RPG book, with a leatherette cover (see below for a pic). The picture on The Book of Starry Wisdom page was a little ambitious in terms of thickness. The one on the current project page looks more realistic, and will make it a nice companion piece to the first volume.

Next up, The King in Yellow Christmas Cards 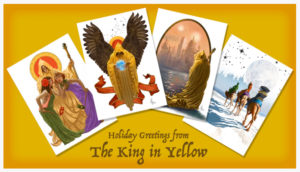 This comes from the team over at Studio WonderCabinet that brought us the Cthulhu Christmas Greeting Cards last year.

With the nights drawing in and Christmas around the corner, now is the time to spread a little madness and the taint of the King in Yellow to your friends and loved ones. Remind them that Aldebaran shines down over them this festival period with these (currently four, maybe more with stretch goals) illustrated cards.

One point to note, these only ship physically in the US. However, for those of us that live in Carcosa, or anywhere else on Earth, they do have a $5 tier where you can get high-res PDFs in various paper formats to print off your own. That’s the level I’ve gone for, like last year. This is even more an incentive for me to get a colour printer. I’d be quite happy to enlarge any of the artwork they’ve produced so far, frame it and hang it up on the wall… except we have very little wall-space at the moment, having been taken over by all the bookcases. DOH!

The project closes on November 16th and at the time of this post has already achieved its $2,000 goal and is marching on towards stretch goals (once they are defined).

And on the note of running out of space, in other Kickstarter related news…

The team over at C is for Cthulhu that funded their colouring book project a while ago have just wrapped up production on the monster that is the Giant C is for Cthulhu plush. It will soon begin shipping (within the next couple of weeks).

Now, to put the size of this plush into perspective, remember I mentioned above that the Book of Starry Wisdom was the size of a regular RPG book…? 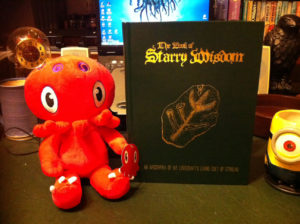 That cute guy on the left is the Red Cthulhu plush they funded in a previous project. Use that as a size comparison for the next pic… 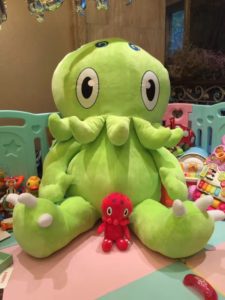 WAAAAAHHHH! No wonder my bank account stings after paying international postage of that guy. Also, little wonder that due to the challenge and cost of making these, the company won’t be making any more of them, making this a very limited collectors piece indeed. I think I’ll have him sitting in my office chair during the day… And he might make an appearance during a recording session one night, just to torment Scott 😉