The Private Life of Elder Things by Adrian Tchaikovsky, Keris McDonald and Adam Gauntlett. Published 2016 by The Alchemy Press. Reviewed by Scott Dorward. 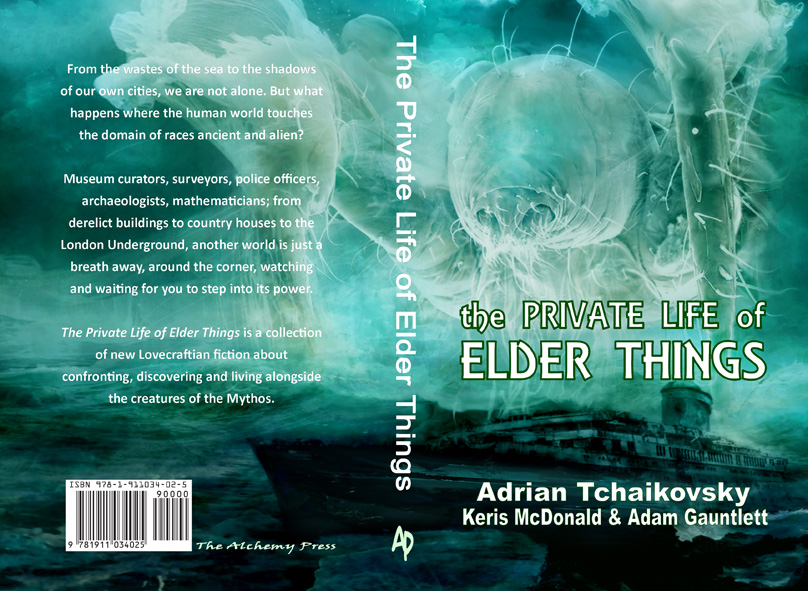 We discuss weird fiction occasionally on The Good Friends of Jackson Elias, but when we do, we try to tie it to gaming. Our focus for the podcast was always meant to be Call of Cthulhu. It only seems fair to take the same approach here, with the first book review to be published on the blog.

The gaming and literary sides of Lovecraft fandom can seem oddly divorced from each other. Many fans of the fiction may not be gamers; after all, a lot more people read fiction than play roleplaying games. It is more surprising how few Call of Cthulhu players have read Lovecraft, let alone other Mythos authors. Call of Cthulhu scenario writers may mine the fiction for source material, and non-gaming authors sometimes contribute to game-related anthologies, but it often seems like they occupy two separate worlds. The Private Life of Elder Things is very much at home in the literary camp, but it also appears to have roots in gaming.

While all three authors of The Private Life of Elder Things are accomplished fiction writers, the brief biographies in the back of the book each mention an interest in Call of Cthulhu or other RPGs. Adrian Tchaikovsky, recipient of the 2016 Arthur C Clarke award, is the only one of the trio not to have published any RPG material, although he is still a passionate gamer. Adam Gauntlett, on the other hand, is a prolific game writer, with a long history of publications by Chaosium, Miskatonic River Press and, especially, Pelgrane Press. Keris McDonald is primarily a writer of horror stories and dark fantasy erotica (under the pen name Janine Ashbless). She has also published one Call of Cthulhu scenario. Out of the three, McDonald is the only one whose work I had never encountered before, but after reading this collection I shall certainly be looking out for it.

The authors of The Private Life of Elder Things have borrowed creatures, locations and artefacts from classic Mythos stories, reinventing them in novel ways. While most of the source material comes from Lovecraft, a couple of stories delve into work by his contemporaries or influences. These elements will be just as familiar to fans of Call of Cthulhu as to wider readers of Mythos fiction, and most can be found in the Keeper Rulebook.

Part of this pleasure of reading this book is trying to work out what aspect of the Mythos is lurking at the centre of each tale. I am wary of spoiling this experience. While I will avoid naming any names when discussing each story, it will sometimes be easy to infer them. If you prefer to avoid details of the stories and decide to stop reading here, rest assured that The Private Life of Elder Things is an unusual and entertaining collection, sure to capture the imaginations of fans of both Lovecraftian fiction and gaming.

The book opens with Tchaikovsky’s Donald. While shorter and simpler than most of the other stories, it is one of the strongest. This is an oddly affecting reminder that while humanity (in Mythos fiction, at least) shares the world with eldritch horrors, these creatures also have to share it with us. Donald may not go as far in humanising the alien as some of the other stories in this collection, but it is still an unusually sympathetic take on the Mythos. This is something of a running theme with Tchaikovsky’s contributions to the book.

Gauntlett’s Pitter Patter is an atmospheric piece that draws obliquely from one of my favourite Lovecraft stories. Gauntlett brings his setting to claustrophobic life through its cramped corridors, darkness and decay, and builds a real sense of dread. Unfortunately, the payoff is the most obvious of the collection. This might have stood out less had the rest of the stories not been so strong.

Special Needs Child, McDonald’s first contribution, is by far the nastiest story present. It follows the lives of a couple of rescue workers who take in a foundling that turns into something feral and inhuman as it grows older. This is an uncomfortable, visceral tale, tinged with tragedy. The ending made me recoil in a way few horror stories have.

Irrational Numbers, from Tchaikovsky, brings one of Lovecraft’s classic creatures into the modern age and the world of mathematics, drawing out the scientific elements of the original story in new directions. There isn’t as much reinvention of the subject here as in Tchaikovsky’s other contributions. Perhaps given how iconic the original story is, this may not be a bad thing. Again, like Pitter Patter, Irrational Numbers is somewhat overshadowed by the other stories, but is still perfectly satisfying.

Gauntlett’s New Build moves away from Lovecraft and into the work of one of his contemporaries. The redevelopment of an old London pub opens up forgotten secrets, placing the protagonists in the path of one of the most dangerous entities of the Mythos. The strength of this story lies in the reimagining of this creature as part of the urban landscape, changing it from a mere monster into something almost mythic. Lovecraftian creatures are always most sinister when they are made strange and alien, and New Build does this excellently.

Branch Line Repairman, from Tchaikovsky, offers the collection’s most original take on its subject matter. Moving the elements of one of Lovecraft’s best-loved stories to the London Underground is a master stroke, making them all the weirder by placing them in a mundane setting. Just as impressively, Branch Line Repairman follows the structure and tropes of a Lovecraft story without feeling derivative. As in Donald, the creatures portrayed are inhuman, but sympathetic in human terms, adding unexpected emotional depth.

McDonald’s Devo Nodenti is equally impressive in its invention. It takes what I have long considered the dullest and most incongruous deity in the Mythos and turns it into something genuinely weird and creepy. The human story underpinning the horror is also compelling, with dark secrets and betrayals set against the backdrop of an archaeological dig and their repercussions decades later.

Even more so than in his other stories, Tchaikovsky makes the Mythos entity at the heart of Season of Sacrifice and Resurrection into something almost human. This is probably the best-written piece in the collection, telling the story of a socially isolated palaeontologist who strikes up an unlikely friendship with a colleague at the museum where they both work. There is nothing remotely horrific about Season of Sacrifice and Redemption; instead, this is a moving character study the likes of which is rarely seen in Lovecraftian fiction.

Prospero and Caliban, from Gauntlett, has the most original setting on offer. Gauntlett hails from Bermuda, which perhaps lends this unusual take on the Bermuda Triangle a richness of believable detail. Two men whose ships have become entangled in a monstrous web of sargasso find themselves facing a foe even more deadly than starvation. The creatures Gauntlett borrows for his story are obscure and kept me guessing all the way through. My favourite detail, however, is that one of the characters, driven quite mad, is only able to communicate in Shakespearean quotations. The effect makes an already strange story into something deliriously weird.

Tchaikovsky’s Moving Targets presents another marvellous piece of reinvention, taking the central conceit of one of Lovecraft’s shorter but still influential tales and turning it into something modern and nightmarish. Two police officers investigate what appears to be a new designer drug doing the rounds of clubs in a London slum, only to discover that something far stranger than mere narcotics is responsible for the weirdness they encounter. While most of the stories in The Private Life of Elder Things operate on a small, human scale, Moving Targets builds to mass catastrophe with merciless inevitability.

The final story, McDonald’s The Play’s the Thing, takes us back to 1902, to a house in northern England that refuses to conform to any sane geometry or architecture. An agent of a mysterious firm is called in to catalogue the rooms of the house, which proves a much more difficult and dangerous task than it first appears. While this tale borrows from some of my favourite stories, I approached it with trepidation, as the element it reinvents has been overused, often quite uninventively. I needn’t have worried. McDonald takes her story in wholly original directions, avoiding all the weary old clichés and making it one of the high points of the collection.

Although every story in The Private Life of Elder Things is a reinvention, none feels like a simple pastiche. It is all too easy to reuse elements of the work of Lovecraft and his peers in trite, obvious ways. Every story here makes its subject new and weird again, whether this is simply by moving it to an unusual setting or by transforming into something surprising.

What makes The Private Life of Elder Things stand out from most Mythos anthologies, however, is the emotional content and humanity of many of the stories. At its best, Lovecraftian fiction is unsettling, imaginative and weird, but it is rarely moving. The poignancy of stories like Season of Sacrifice and Resurrection and Devo Nodenti is all the more powerful for its presence in such an unexpected place.

As I mentioned at the start of this review, it is difficult for me to read Lovecraftian fiction without looking at the possibilities for gaming. Like the authors, my interest in the Mythos was fuelled by playing Call of Cthulhu. Keepers looking for examples of using Lovecraft’s creations in novel ways will much to fire their imaginations here. The Private Life of Elder Things is more than a source of new scenario seeds, however; it is a fantastic example of how you can prevent your games from becoming stale and predictable while still using all the goodies Call of Cthulhu has to offer.

7 comments on “The Private Life of Elder Things”