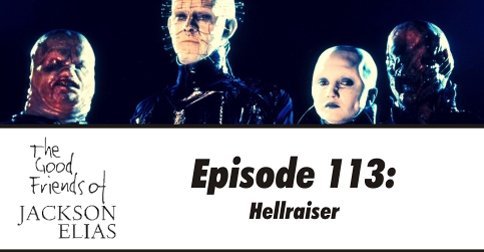 We’re back and we have such sights to show you. Or tell you. Can you really tell a sight? You can tell of it, but does that really convey the same visceral impact? This is all getting rather tortuous, appropriately enough. Regardless of which orifices you use to receive us, we are here to tell you all about Clive Barker’s 1987 horror film, Hellraiser. We discussed two other Barker films — Nightbreed and Lord of Illusions — back in episode 68, but Hellraiser was where it all started. Sort of. 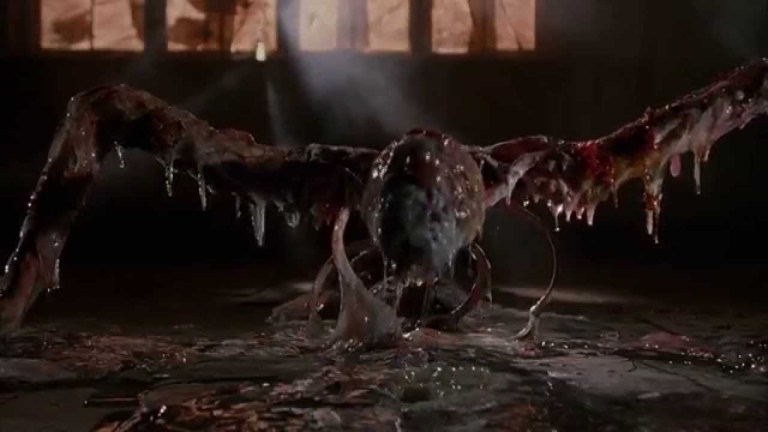 Or it might have started with a few drops of spilt blood.

While Barker had made two short films — Salomé and The Forbidden — and written two largely forgettable features — Underworld and Rawhead Rex — Hellraiser was his first major outing as a film director. On the back of Barker’s soaring reputation as a writer, Hellraiser was touted as the future of horror. While this is pretty standard hype, the film has remained an enduring favourite for 30 years. It also spawned an enduring franchise and established Pinhead as a horror icon. 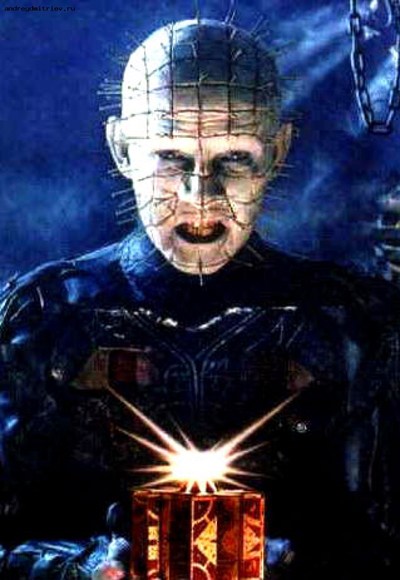 Although if he agrees with Barker’s opinions on his name, calling him “Pinhead” will only make your torment worse.

Hellraiser has grown into an ever-expanding mythology, spanning 9 films, a comic series and several books. We focus on the first film, for now, pretending the rest of the canon doesn’t exist. That said, we make a few comparisons to the source novella, The Hellbound Heart, also written by Barker. There is a great deal to be said about the larger mythos of the Cenobites and their attendant horrors, but it is too much to fit in a single episode. If you would like us to do a follow-up, please let us know. You can use the Contact Us form or Social Media links on this site to do so. 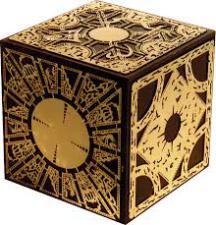 Or if you solve the right puzzle box, we will come to you.

Of course, we also sink our analytical hooks into the film, tearing out great, bloody chunks of gaming meat. Hellraiser was one of the major inspirations for Kult, which we discussed way back in episode 31. Here, however, we focus more on what we can steal for our Call of Cthulhu games. 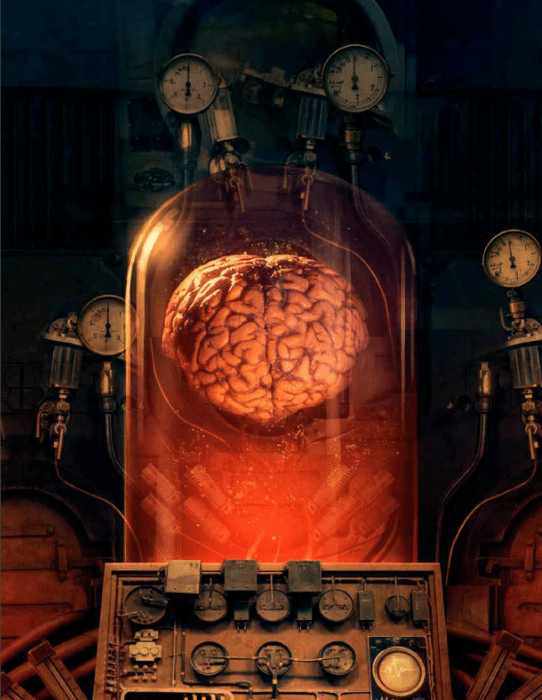 The Cenobites aren’t the only entities that wish to take you beyond the limits of human experience.

We’re not long back from the Necronomicon convention, where we had a wonderful time. There is so much to say about it that we shall have to record a special episode. Keep an eye out in your feed for that as well as recordings of the seminars on which we appeared. You can already download our joint episode with our good friends at the Miskatonic University Podcast. We have also released some short videos of our visit to Providence, and Paul posted a whole bunch of photos to our Twitter feed.

We didn’t spend all our time in the pub, not that the photographic evidence supports this.

Speaking of Necronomicon, Paul asked a number of Lovecraftian luminaries to sign his convention programme. He has put it on eBay to raise funds for Cancer Research UK. Please take a look if you fancy snapping up something unique and giving money to a good cause! If you would like more information, Paul has posted further details of who the signatories are.

While we were in Providence, we heard the delightful news that Call of Cthulhu had done rather well at the ENnie Awards. A good number of projects we were involved with won gold awards, and we would like to thank everyone who voted for them! We just wish that Gen Con and Necronomicon hadn’t fallen on the same weekend so we could have been there in person. Congratulations to Chaosium and to Stygian Fox for their well-deserved success! 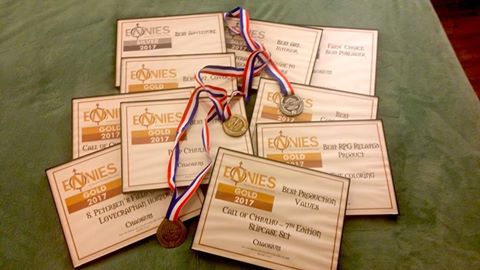 All three of us will be attending the Concrete Cow convention in Milton Keynes on Saturday the 16th of September. It’s walking distance for one of us, so it would be rude not to! Concrete Cow is a fun, friendly little one-day convention, and we would love to see you there. Doors open at 9 AM, with the first game starting at 10 AM. Admission is £5.

And speaking of upcoming events, we will also be taking part in the Milton Keynes Literary Festival later this month. All three of us, along with Mike Mason, will host a panel about the connection between roleplaying games and weird fiction. This will take place at 7 PM on Monday the 25th, at the Holiday Inn in Central Milton Keynes. Admission is free. We will offer some short demo games afterwards.

Scott will also be interviewing local fantasy author AFE Smith about the influence of real-world politics on her fiction. This will take place at the Holiday Inn at 7 PM on Saturday the 23rd. Admission is £5. 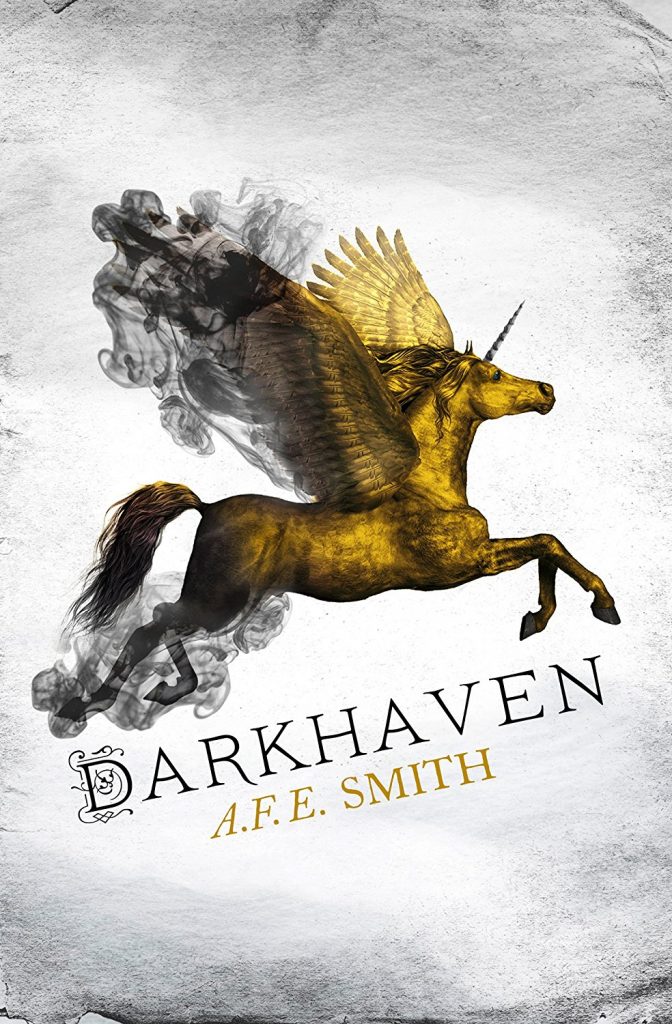 In keeping with the theme of transcendental experiences that lie between torture and ecstasy, we sing again in this episode. Two new souls have called upon us by backing us at the $5 level on Patreon. We’ll tear their names apart.

There are a couple of recent backers we really should link to, as they produce interesting things that will appeal to our listeners. The Esoteric Order of Roleplayers is an actual-play podcast that covers a wide range of games and has a healthy back-catalogue. We were also backed recently by Daupo, who some of us met at Necronomicon. He creates wonderfully nightmarish artworks, many with Lovecraftian themes, which can be purchased from his website. 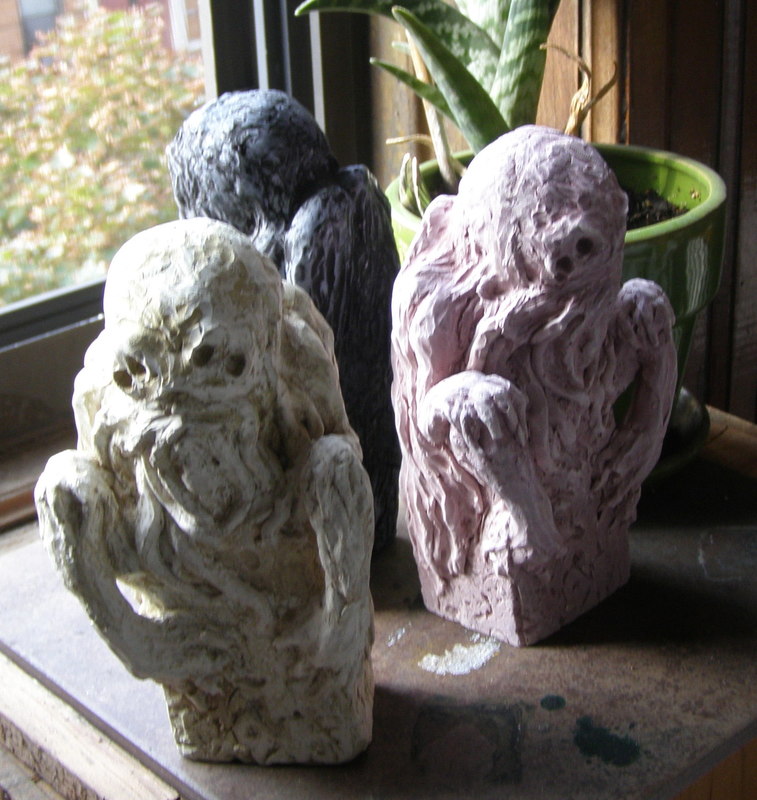 Some of Daupo’s eldritch creations.