We currently putting the finishing touches to the latest issue of The Blasphemous Tome. This is the print-only fanzine we produce exclusively for Patreon backers of The Good Friends of Jackson Elias.

Barring last-minute delays, backers should receive their copies with their Christmas cards. It doesn’t get any more festive than that!

We plan on posting the Christmas cards on the 11th of December. That said, we will carry on sending copies of the Tome to anyone who becomes a backer before the end of the year. 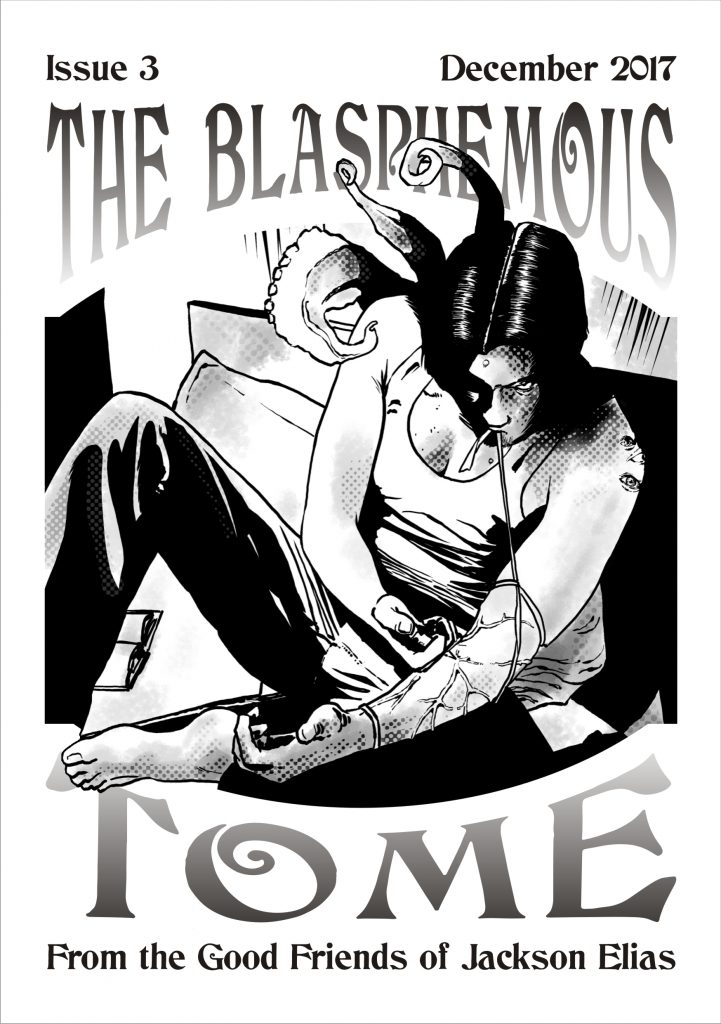 What is The Blasphemous Tome?

The Blasphemous Tome is our attempt to recapture the spirit of gaming fanzines of the 1980s, staples, wonky layout and all. For maximum verisimilitude, we make Matt use Courier for the body text, even though this makes him cry. Some of the paste marks on the pages may actually be tear stains.

The Blasphemous Tome only exists in a physical form. There were no PDFs in the 1980s. They were dark times.

We print enough copies for our backers, with a few spares as prizes for charity raffles, review copies and the like.

What’s in this issue?

This issue sees the return of a few regular columns, as well as some new features. Once again, we also have contributions from our wonderful and talented listeners.

One major change is that this is the first Tome to be officially licensed by Chaosium! This means that we are able to include content specifically for Call of Cthulhu. We have taken advantage of this and written a new Pulp Cthulhu scenario, called A New Age of Wonders! As heavy snows descend, festivities at a ritzy New Year’s Eve party in Vermont soon turn to death and madness. The heroes will have to grapple with mad science, horrible monsters and a sinister plot that threatens humanity’s very existence.

And of course, we have art. The issue is filled with excellent and atmospheric work by Lucy Fricker, Daupo, Evlyn Moreau, Symon Leech and Linus Larsson.

Once again, we have an amazing cover from good friend of the Good Friends, Jonathan Wyke. Jonathan has illustrated many of the books we’ve done for Chaosium, and we are always excited to see him bring our fevered imaginings to unwholesome life.

We only produce The Blasphemous Tome for our Patreon backers. We do not sell copies directly.

If you want the latest issue, simply back us on Patreon at any level by the end of the year.

3 comments on “The Blasphemous Tome issue 3”