At the time of writing, the Kickstarter for The Idol of Cthulhu has gone live! 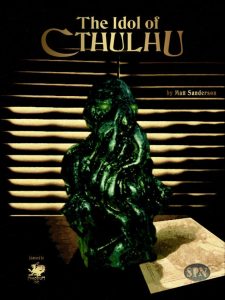 I was contacted a little while ago by Delphes Desvoivres – the organizer of the Props of Nyarlathotep (New York & Kenya, London & Cairo) and Sedefkar Simulacrum Kickstarters – and invited to write a scenario that would accompany the Idol of Cthulhu sculpture that they plan to produce.

The scenario will be a sequel to the original The Call of Cthulhu story by HP Lovecraft. How long the scenario becomes will be determined by stretch goals for the campaign. The scenario will have multi-media components – the sculpture itself can be used as a key physical prop, and audio recordings will be provided by none other than the immensely talented HP Lovecraft Historical Society! Needless to say, I’m rather excited about this project and can’t wait to see how far it goes.

Stretch goals coming up include: maps of Providence and Rhode Island; cards featuring the likeness of the NPCs; expanded content for the scenario; creation of another prop for the scenario, the “Call of Cthulhu” manuscript, as written by the late Francis Wayland Thurston of Boston.

At the time of writing, the Kickstarter campaign went live about three hours ago and is more than 80% of the way to its initial target of €5,000, and has 20 days to run. The campaign ends on 27th December 2017.