Hello everyone! It’s been quiet on the Kickstarter front for a while, but once again, like buses, there’s been a sudden flurry of activity and now there are a few projects to choose from. Here are the projects I’ve backed recently: 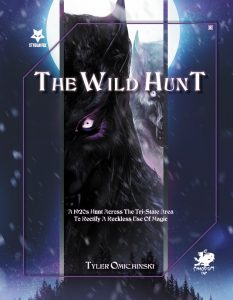 This is a new scenario from Stygian Fox Publishing, written by Tyler Omichinski. As the title indicates, at its core is the Wild Hunt. Bringing myths and legends into a scenario is always a big plus for me, so I’m in!

The campaign funded pretty quickly and has a number of formats available (PDF, softcover, hardcover, and a couple of limited editions).

The project has fully funded at the time of writing this and finishes on 1st March 2018. 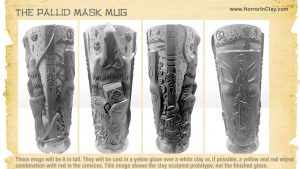 From the crew that brought you “The Horror in Clay” (yep, I’ve backed most of their projects), the Pallid Mask allows you to get up close and personal to the King in Yellow and not take any SAN loss – well, it depends what you’re drinking out of him, I guess. I think this would make a great vessel for a Piña Colada! One side of the tiki mug shows the King in Yellow, the other presents the Pallid Mask (complete with some of the patterns from the early editions of the Chambers book).

This project varies a little bit from the previous projects the creators have run. There are the usual additions (coasters, stickers, other bits and bobs) but this is the first that’s featured a scenario with it. It’s not a licenced Call of Cthulhu scenario, but is instead described as “a custom-written D6 tabletop RPG module”. The title is “The Pallid Mask: Shores of Carcosa” and is set in Portland. Not much has been released about it yet, but a demo is expected shortly to be released to backers.

The project has fully funded at the time of writing this and finishes on 6th March 2018. 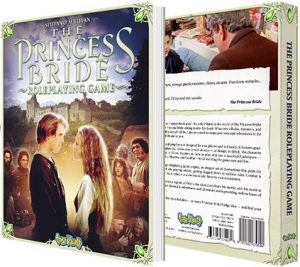 I wonder how many readers have said or thought “Inconceivable!” at this point? 😉

I know it’s not Cthulhu related (or even horror), but as it was recently mentioned in a podcast episode, I thought I’d mention it here. I got to play a great one-shot of this game at Contingency last month, run by John Gathercole using the quick start rules, and really enjoyed it. Some memorable moments with a boar from that scenario! The game uses the Fudge mechanics, so it’s nice and simple, which is definitely a plus for me.

Originally, the licence restrictions that Toy Vault faced meant that they could only ship the RPG to the USA and Canada. It seems like enough people complained about this (I know I was a bit grumpy about this when I first found out, as I really wanted to pledge) that they have now opened up international shipping – WOOHOO!

And lastly, just for Scott…

C is for Cthulhu Blanket-Stuffed Pillow! 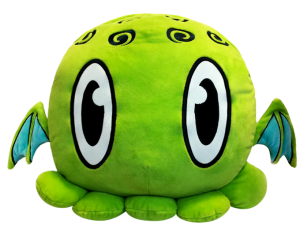 Yep, they’re at it again! This time, the team has produced a C is for Cthulhu themed cute pillow that comes stuffed with a blanket (basically a larger version of the baby blanket that was released in the last project for “Sweet Dreams Cthulhu”). It features Cthulhu all wide awake on one side, and fast asleep on the other.

Pledges cover a range of options, allowing backers to get their hands on previously produced goodies (plushes, books, etc.). I’ve picked up a couple of pins and fridge magnets alongside the new stuff.

Unlike previous projects, this one’s only a short run as they have everything ready to ship, so it’s more to help get the initial batch of them off the ground and out to backers.

The project has fully funded at the time of writing this and finishes on 28th February 2018.