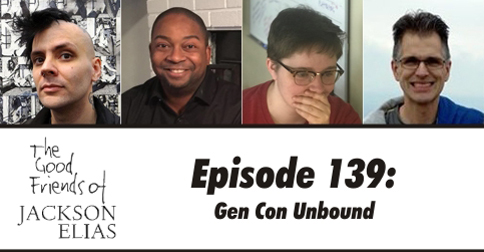 We’re back and we’re discussing all the nifty Cthulhu-related stuff that happened at Gen Con 2018 (and one non-Cthulhu thing). Well, I say “we”, but this largely means Paul, as he’s the only one of us who went. To stop this being a monologue, however, he interviewed some of the people he met there.

Note: We recorded this episode before the allegations about Zak Smith’s abusive behaviour. While we have decided not to withdraw the episode, we have added a warning to the start. We do not plan to release any more content about Zak or his work.

Paul starts with news about the convention, including the Diana Jones Award, the Cool of Cthulhu panel (recorded by our good friends at the gold-ENnie- Miskatonic University Podcast) and the ENnie Awards.

He then tells Matt and Scott about all the interesting people he met. These include Chris Spivey of Darker Hue Studios (whose Harlem Unbound dominated the ENnies this year), Sam Riordan of MetaArcade (publishers of the Cthulhu Chronicles app), Bob Geis of You Too Can Cthulhu, and multi-award-winning writer and artist, Zak Smith. You can hear interviews with all of them in this episode.

Paul also mentions a number of listeners he met at the convention, including the hosts of the Dave and Gary podcast. Thank you to everyone who introduced ves!

As if Paul hadn’t worked hard enough to make Matt and Scott jealous, he also whipped out a box of goodies from the HP Lovecraft Historical Society that he had picked up at Gen Con. This was the Gamer Prop Set that accompanies the HPLHS’s upcoming Dark Adventure Radio Theatre presentation of Masks of Nyarlathotep. The box contains more authentic period handouts, props and eldritch marvels than you could shake a black sceptre at.

Paul and Scott will be joining Mike Mason at Tabletop Gaming Live 2018, at Alexandra Palace on the 29th of September. We will be giving a seminar at 12:00, titled Calling Cthulhu, as well as running some demo games.

Stygian Fox released Fear’s Sharp Little Needles, their latest anthology of modern-day Call of Cthulhu scenarios. Matt and Scott have scenarios in the book, and Scott also has a short story in the accompanying fiction anthology, Puncture Wounds. Both of these publications are available as ebooks or print-on-demand hardcopies.

Scott also talks about his recent visit to the Grand Tribunal convention in Cheltenham. This friendly little get-together started out as an Ars Magica convention and has grown into something more general over the years. It takes place annually, with the next one due in August 2019. Highly recommended!

If you miss Matt and Scott’s voices during the interviews, just hold on for a bit. Towards the end of the episode, we all sing our thanks to a Patreon backer. If you’re not sick of the sound of us after that, we have failed.

Speaking of Patreon rewards, we also remind you that we are busy preparing issue 4 of The Blasphemous Tome. This is the annual old-school fanzine we produce for backers of the podcast. If you would like to know how to secure your copy and what to expect, check out our recent post.

And in our segment on recent social media posts, we mention a lively thread about our episode on the role of insanity in Lovecraft’s fiction. Most of the feedback we get comes via our Google+ Community, but this time it was a post to the Call of Cthulhu Facebook group that blew up.