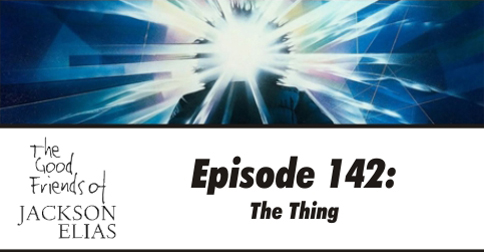 We’re back and we’re eyeing each other suspiciously, freezing our bollocks off and watching in dismay as our blood sample runs screaming out the door. This is our look at John Carpenter’s 1982 science fiction/horror masterpiece, The Thing.

After years of independent features, The Thing was John Carpenter’s first studio film. It had a decent budget, strong cast and ground-breaking visual effects. After 35 years, it remains an enduring cult favourite. So why was The Thing a critical and commercial failure at the box office when first released?

We cut into the entrails of the film, examining its background along with our synopsis. Then, as you might expect, we let it infect us, transforming our games. We offer a few ideas about how The Thing could reshape itself as a Call of Cthulhu scenario. Given the apparent influence of Lovecraft’s At the Mountains of Madness, this isn’t too tricky.

In our discussion, we mention a few related works:

We recently released a special episode, recorded live at the first Tabletop Gaming Live event in London. You can hear Mike Mason, Paul and Scott answer questions about all things Cthulhu. Alternatively, if you can stomach our faces, you could watch the video instead. We’d prefer that you didn’t stomach our faces, however. Stomachs are full of acid and that stuff stings.

It would be remiss not to remind you that issue 4 of The Blasphemous Tome is approaching fast. This is the print-only fanzine that we produce to thank our Patreon backers. Issue 4 features a new Call of Cthulhu scenario from Matt Sanderson and an amazing cover from the equally amazing Evan Dorkin. If you would like to learn more about what lurks within and how you can invite it into your home, please see our recent post.

In our social media section, we discuss some of the feedback we received on our recent episode about the joy of failure. In particular, we mention a post from Uncaring Cosmos which really must be read in its entirety. You can find it and the rest of the discussion in our Google+ Community. (Yes, we know that Google has announced the closure of G+. We are currently investigating alternatives.)

And we make passing mention of friend of the Good Friends Frank Delventhal’s terrifying ability to blow up hot water bottles like balloons. We promised a video, so here it is.