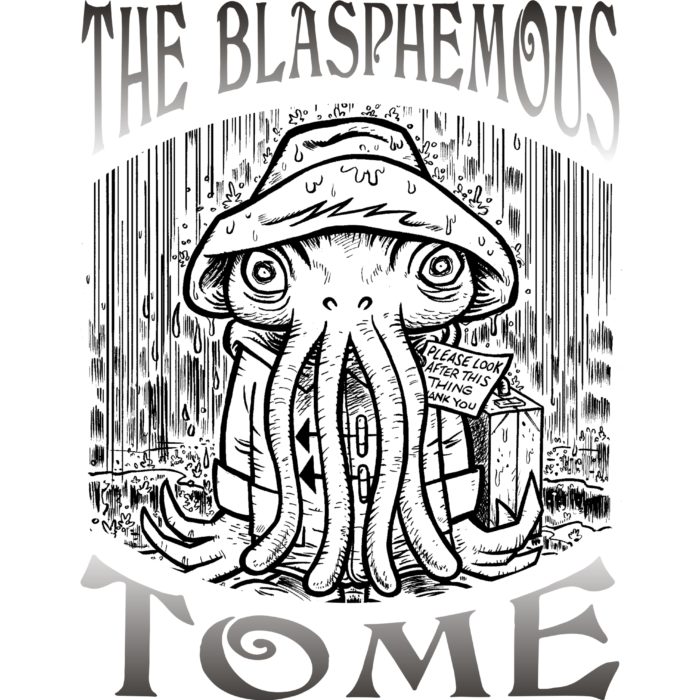 Issue 4 of The Blasphemous Tome is going to press!

This is the print-only fanzine that we create for Patreon backers of The Good Friends of Jackson Elias podcast. It contains articles about RPGs, horror films and weird fiction, not to mention plenty of sanity-blasting artwork and original content for the Call of Cthulhu roleplaying game.

Everyone backing us via Patreon by the end of this year will receive at least one copy of the Tome.

Featured in this issue is a new Call of Cthulhu scenario by our very own Matt Sanderson, titled “The Hero Affirmed”.

December in Detroit. The bitter cold claims the lives of more and more homeless people every year. The largely abandoned districts of the city offer shelter from the cold winter nights. But the homeless are not the only ones seeking shelter. Something else has come in out of the snow, looking for the warmest of hosts.

The cover, along with several pieces of internal artwork, comes from many-time Eisner-Award-Winning comic artist Evan Dorkin. We also have illustrations from many of our other favourite eldritch artists, including Daupo, Lucy Fricker, Bev Gordon, Bethan Harris, John Sumrow, Jef Wilkins and Jonathan Wyke.

Other articles in this issue include:

If you would like to receive one or more copies of The Blasphemous Tome, all you have to do is back us on Patreon before the end of the year. If you are a backer before we ship out our first batch in late November, you will also receive one of our custom, Mythos-themed Christmas cards. Even unspeakable horrors deserve a little festive cheer.

Please note that we do not sell copies of The Blasphemous Tome. It is purely a reward for the wonderful people who back us via Patreon.

The Blasphemous Tome is licensed for the Call of Cthulhu roleplaying game by Chaosium, inc.