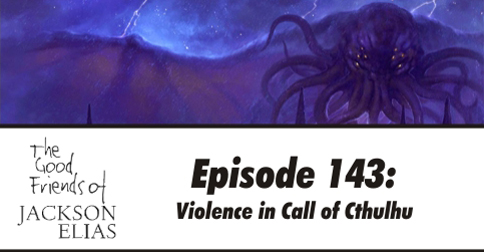 Violence in Call of Cthulhu

We’re back and we’re loading our shotguns, lighting a bundle of dynamite and laying waste to everything we see. This is our look at the role of violence in Call of Cthulhu. Boom!

If you’ve spent any time discussing Call of Cthulhu online, you’ve probably had someone tell you that if your investigator so much as enters combat, you’ve lost. This is a game of careful investigation, putting pieces together and learning secrets man was not meant to know. If that’s the case, why do most of our games end up with g in smithereens?

This is not to say that violence in Call of Cthulhu is a bad thing. We’ve all played plenty of fun, action-packed games. It just seems like the easy option sometimes. In the real world, we (as individuals, not a species) usually sort out our conflicts non-violently. An average group of investigators, on the other hand, tends to resolve most scenarios with extreme prejudice. Why is this and what are the alternatives?

Following our usual format for such discussions, we look at the portrayal of violence in Lovecraft’s fiction, the role it plays in Call of Cthulhu and how we might put together a scenario that doesn’t rely on a violent resolution. Then we punch each other in the face and burn Paul’s house down.

Dragonmeet is mere weeks away and we’re giddy with excitement. All three of us plan to be there and we would love to meet you. For most of the day, we can be found in the podcast zone, doing podcast-related things. Then, at some point, we shall appear on a seminar with our good friends Baz and Gaz from the Smart Party. We will debate whether all RPGs are pale imitations of D&D (spoiler: they’re not). If you can’t make it in person, we plan to record the seminar and release it as a special episode.

Violence is only one of the unspeakable acts that people perpetrate upon each other. Our singing is another. We sing twice in this episode, thanking two new $5 Patreon backers. Being torn apart by a rampaging mob of investigators has nothing on this.

And speaking of Patreon, issue 4 of The Blasphemous Tome is almost ready to go to press. This is the print fanzine we produce to say thank you to our backers. Anyone backing us by the end of this year will receive at least one copy. See our recent post for more details.