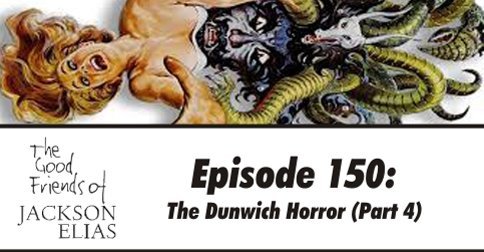 We’re back and we’re preparing for the apocalypse. To be fair, this seems to be a pretty understated apocalypse. It mostly involves an invisible monster prancing around a hilltop. Maybe the creature will do something world-ending up there. For now, we’re mostly worried about our cattle.

This is the final part of our unusually long look at Lovecraft’s weird tale, The Dunwich Horror. It’s taken us four episodes to cover it all, but we think this is warranted. Whether or not you think this is a good story (and there’s some dissent about this in the episode) it is an important one. Lovecraft laid out some key components of the Cthulhu Mythos here. The tale may arguably be less than the sum of its parts, but oh what parts it has.

As well as the story itself, we also look at its spread into other media.

Somehow, we’ve hit 150 episodes! We’ll cheerfully ascribe this to hard work, dedication and passion, although most of it is simply due to the relentless passage of time. Every episode is another roadside marker on our steady path to the grave. Um. Hang on. This was supposed to be a celebration. 150 episodes, everyone!

As you may be aware, the latest issue of The Blasphemous Tome featured a cover by comics legend Evan Dorkin. In particular, Evan created an adorably terrifying eldritch horror named Pad’thulhu. Sculptor David Kirkby was so taken by Pad’thulhu that he created the cutest horror in clay that any of us have seen, bringing it to life. We shall auction this sculpture soon to raise money for Cancer Research UK. Our plan is to start the auction on the 5th of March and run it for 10 days. Watch our social media for more details closer to the time.

Google+ is going away on the 2nd of April. Despite its reputation as a failure, it was the online home for much of the tabletop RPG community, including us. In our search for a replacement, we have created a subreddit for the Good Friends. We believe that this will offer most of the functionality we have grown used to. As promised in the episode, here’s an article explaining Reddit for beginners. And, if Reddit doesn’t suit you, we can still be found all over the internet.

If you would like to preserve your posts before G+ disappears in a puff of mismanagement, Google created a tool, named Google Takeout, to let you do so. You can find instructions for it here.

As we mentioned, it’s not been long since we released issue 4 of The Blasphemous Tome. With it being a small ‘zine, we struggled to put everything we wanted into it and had some leftover material. Happily, a solution has presented itself. Around the middle of this year (probably the end of June) we shall release the Blasphemous Tome 4 1/2. The main difference between this and its big brother is that issue 4 1/2 will be a PDF-only release. You can still print it out, of course! We shall provide regular updates over the next 4 months.

In the first episode of our discussion, we pondered what limerick might start with “There was a young man from Dunwich”. This proved disturbingly inspirational to our listeners and our inboxes filled up with verse. We read out a few of our  in this episode, but do check our various social media feeds for the rest. In particular, CthulhuBob combined several limericks to create an epic verse in the comments to that episode’s show notes. Scroll down to the bottom to find it.

As sanity-blasting as some of the adaptations of The Dunwich Horror might be, they’re nothing compared to our songs. This episode contains two such productions, offered in thanks to new Patreon backers. We still have many more to go, so don’t relax yet.

And speaking of strange rewards, we are still releasing rough cuts of episodes to Patreon backers. These are largely uncut recordings of what happens when the three of us get together to make an episode. As well as all the stumbles and retakes, they include material we simply couldn’t fit in the show. Oddly enough, not all of this is dick jokes. Check Patreon for details.