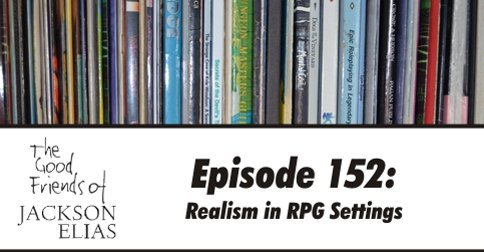 We’re back and we’re trying to maintain our grasp on reality. This is tenuous at the best of times, and all this conflation with imagination is doing it no favours. In this episode, when we say “reality”, we mean the reality of the game world we’re playing in. Is that even a reasonable term to use when talking about a setting filled with malevolent alien creatures from beyond space and time?

This episode is our attempt to understand what makes a game setting feel real. We looked at the role of game mechanics last episode, but they are only one piece of the puzzle. In order for players to buy into a game, they generally have to find the setting plausible. How does this apply to RPGs set in worlds of fantasy, science fiction or weird horror? And what aspects of historical accuracy make or break a game?

In the news segment, we offer another reminder that our Google+ community is going away on the 2nd of April. To be fair, all of G+ is shutting down then, but we’re focusing on the important stuff. You can still find us on Discord, Facebook, Twitter, Reddit, Patreon and under your bed at night.

Scott shares his experiences at PodUK, where he recorded a live episode with How We Roll and Dirk the Dice from The Grognard Files. We released the recording of our playthrough of Leigh Carr’s marvellous scenario “The Necropolis” as a special episode. There were a number of other fine podcasts there, including Orphans, Wooden Overcoats, Victoriocity, Death in Ice Valley and Flintlocks & Fireballs. Why not put some of them in your ears?

And we offer another reminder that we are working on issue 4 1/2 of The Blasphemous Tome. This is the digital sibling to our print-only fanzine, destined to travel across the digital ghoul winds to our Patreon backers this summer.

We are still releasing the raw versions of new episodes on our Patreon RSS feed. Episode 152’s unedited version is especially long as it also includes our first attempt at talking about this topic. The two takes are very different, and while we were happier with the second, the first has some good stuff in it. You can also find our Weird Whisperings on the Patreon RSS feed. These are the occasional recordings we make of some of the weird tales we’ve discussed.

There are two songs in this episode. Suspending your disbelief won’t save you. These are, as ever, our hideous method of thanking new $5 Patreon backers. We still have a few more of you to thank, but only dare to record two songs per episode. I’m sure you can understand why. If your song has yet to find you, it will soon. Some things are shudderingly inevitable.