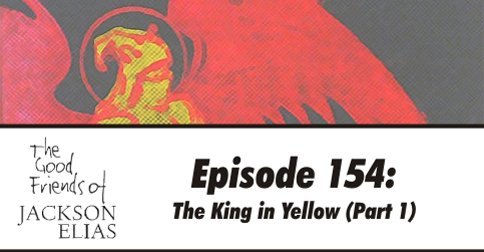 The King in Yellow (part 1)

We’re back and we’re taking a look at this odd play that’s appeared on our shelves. The King in Yellow? That’s not a volume we remember buying, but we do have so many books. The yellow snakeskin cover is rather appealing. Sure, we’ve heard dire warnings about its content, but we’re made of sterner stuff. The first act seems rather banal, after all. Nothing to worry about!

This is the first of a number of linked episodes looking at different aspects of Robert W Chambers’ most enduring creation, The King in Yellow. Confusingly, this is the title of the book he wrote, the play within it and an entity described in the play. Given the maddeningly vague nature of the Carcosa Mythos, this seems entirely appropriate. (We’ve borrowed the term “Carcosa Mythos” from The Yellow Site — a comprehensive and useful site for anyone interested in The King in Yellow.)

In this first episode, we set the scene with some background on Chambers, an overview of The King in Yellow collection, and a look at some of the works that may have influenced it.

In particular, we discuss:

We also make passing mention of the Carcosa board game.

Shortly before we recorded this episode, we received the sad news of Larry DiTillio’s death. While most of his writing career was spent in television, working on such programmes as Babylon 5, He-Man and the Masters of the Universe, and The Real Ghostbusters, it was his work as an RPG author that affected us directly. DiTillio’s most famous RPG creation, Masks of Nyarlathotep, still looms large over the field some 35 years later. And, given that he created Jackson Elias, we partly owe the existence of this podcast to him. Our condolences go out to his family, friends and everyone else who knew him.

We recently loosed a most adorable horror upon the world. The charity auction of Pad’thulhu raised £186 for Cancer Research UK. Thank you very much to everyone who bid on him, to Evan Dorkin for creating him, and to David Kirkby for rendering him in clay and donating him to such a wonderful cause!

Back in episode 143, we discussed the role of violence in Call of Cthulhu. This inspired Jon Hook to create a mini-supplement called Visceral and Emotional Damage, which does an amazing job of turning trauma into more than a mere bookkeeping exercise. He has released it via the Miskatonic Repository for a very reasonable $2. Jon has also generously offered it free of charge to our Patreon backers. If you sponsor us, check our Patreon feed for details.

As well as the usual horror of our songs of praise to new $5 Patreon backers, listeners to the unedited version of this episode can “enjoy” a fresh abomination. Good friend of the Good Friends, Symon Leech, suggested that we introduce the raw recording by singing The Japanese Sandman (YT: “The Japanese Sandman” (Nora Bayes, 1920))

. Mercifully, we only sang one verse of it, although we did have a couple of attempts. If you are a Patreon backer, check your special RSS feed. It waits for you there.