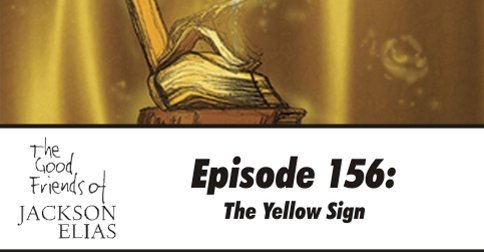 We’re back and we’re looking for the Yellow Sign. It’s probably fallen down the back of the sofa again. Have you found it? It’s tricky to describe, but you’ll know it if you see it. The whole impending doom thing is a bit of a giveaway. Just try not to read any strange plays for now.

After two episodes about Robert W Chambers and The King in Yellow, we’re getting a little more specific. This is an in-depth look at one of the foundational stories of the Carcosa Mythos. Along with “The Repairer of Reputations”, “The Mask” and “In the Court of the Dragon”, “The Yellow Sign” defines the building blocks of Chambers’ most famous creation. It not only expands on the Yellow Sign itself but tells us more of the play and the effect it has on those who read it.

A few things came up during our conversation that warrant links, elaboration or correction.

And we promised to link to the short film of The Yellow Sign we found on YouTube. There are three parts to it, so let it play on.

Matt and Paul attended Concrete Cow 19 and ran some Call of Cthulhu and Kult: Divinity Lost. If you missed them, we’ll be at Concrete Cow 19 1/2 on the 14th of September. See you there!

The Yellow Sign is an unwelcome intrusion into the lives of those who find it, bringing madness and destruction. We’re not saying that our songs have the same effect, but… Oh, hang on, that’s exactly what we’re saying. These two new bouts of thanks to Patreon backers are pregnant with premonitions. If they give you prophetic nightmares, please do let us know.

We shared a fresh iTunes review from Soren H, which made us very happy. Reviews delight and sustain us. If you feel moved to write one of your own, you will earn our undying gratitude. And when we say “undying”, we mean it. You could chop its head off and bury it at a crossroads at midnight and it would still keep offering thanks from beyond the grave.

Following our recent mention of Sons of Kryos, DrColossus1 got in contact via Reddit to let us know that Judd Karlman has a new podcast, Daydreaming About Dragons. It’s safe to say that The Good Friends of Jackson Elias wouldn’t exist without Sons of Kryos, so it’s marvellous to see Karlman return to podcasting.